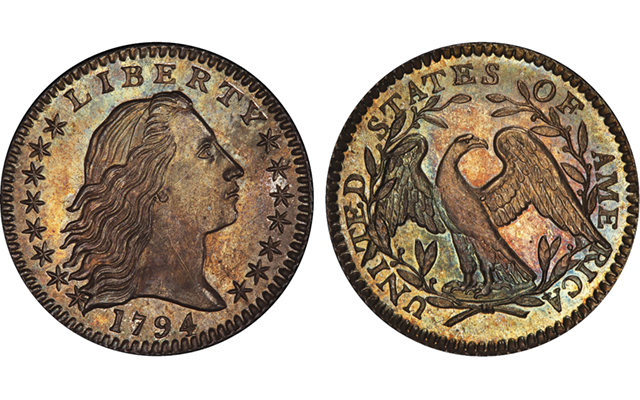 The 1794 Flowing Hair half dime struck during the denomination’s first year of production for general circulation is graded Specimen 67 by PCGS. 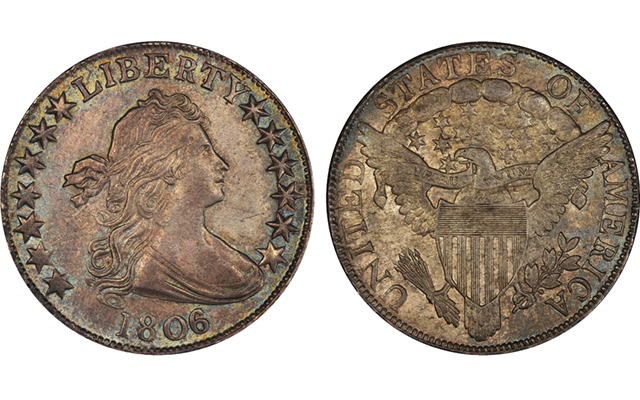 Graded PCGS Mint State 63, the 1806/5 Draped Bust half dollar was once in the famed Garrett Collection. 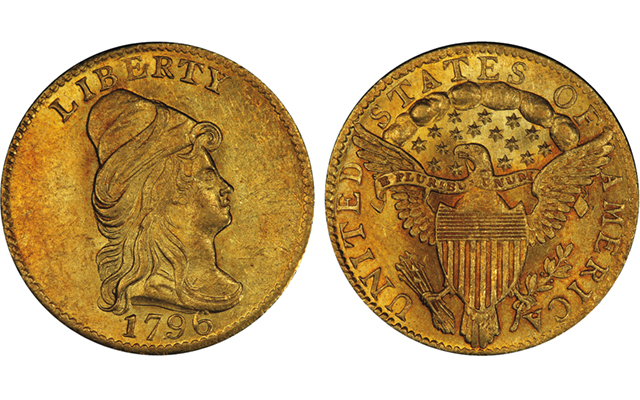 By the time the action ends May 18, 2017, for the seventh and final auction session for the D. Brent Pogue Collection, some numismatists predict the cumulative prices realized will exceed $200 million.

The collection is being dispersed through seven auctions scheduled through 2017 in a collaborative venture between Stack’s Bowers Galleries and Sotheby’s.

Totaling more than 650 lots, the Pogue Collection, assembled over more than 35 years, represents the gamut of United States coins, from the 1792 Flowing Hair half disme to gold $20 double eagles.

Stack’s Bowers and Sotheby’s have been jointly promoting the collection, including taking selections from the Pogue Collection for display at U.S. coin shows and recently to Sotheby’s London auction galleries.

Among the 127 lots offered are a 1794 Flowing Hair half dime graded Specimen 67 by Professional Coin Grading Service, a PCGS Mint State 63 1806/5 Draped Bust half dollar, and a PCGS MS-62 1796 Capped Bust, No Stars quarter eagle.

The 1794 Flowing Hair dime, according to the auction lot description, exhibits evidence of its special preparation with prooflike surfaces and fully struck details. The coin was struck at the Philadelphia Mint.

“While many early strikes show some level of reflectivity this coin displays purposeful polishing of the planchet that reflects both planning and a high level of interest of this particular specimen’s aesthetics from before the die faces met it surfaces,” according to the lot description.

Once part of the famed Garrett Collection, the 1806/5 Draped Bust, Knobbed 6 half dollar is the Overton 101 variety. Varieties are cataloged in Early Half Dollar Die Varieties 1794-1836, by Donald Parsley, expanded from the original work of Al C. Overton.

The original mintage of the No Stars subtype is believed by researchers to be 897 coins, with roughly 100 examples extant.

Later in the production year for 1796 quarter eagles, the obverse was modified to incorporate 13 six-pointed stars on the obverse.

Decades in the making

The collection was begun in the 1970s by D. Brent Pogue, with the active participation and encouragement of his father, Dallas real estate developer A. Mack Pogue. From the outset, Brent built a large library and learned about early federal coins with emphasis on the issues from 1792 to about 1840.

In 1979, Brent Pogue was on hand to preview the Garrett Collection.

In 1982 he previewed the Eliasberg Collection of U.S. Gold Coins, and acquired from that auction the only examples of the 1822 Capped Bust $5 gold half eagle and 1854-S Coronet half eagle in private hands.

In 1996 and 1997 he acquired Eliasberg copper, nickel, and silver coins, and in 1999, from the Childs Collection, he acquired the finest known Class I 1804 Draped Bust silver dollar.