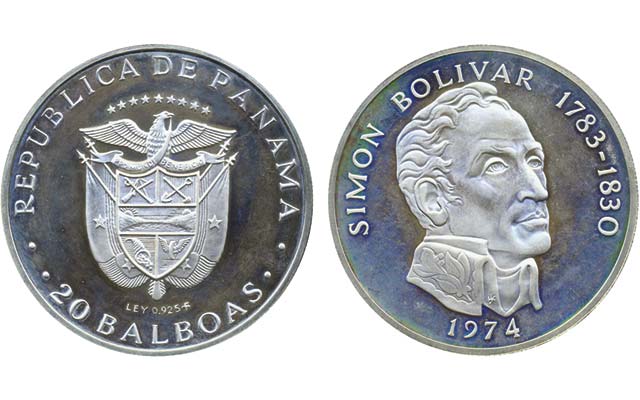 Issued between 1971 and 1978, Panama’s Simon Bolivar 3.85-ounce 20-balboa coin was the largest silver coin in the world when it debuted. It gradually found a following and set the stage for more big silver coins in excess of 1 ounce.

This is the second part of a feature by Rita Laws exploring the proliferation of 5-ounce silver coins from around the world.

Though large silver medals helped familiarize collectors with the concept of large silver issues, it was Panama's silver 20-balboas coin that served as a precursor to 5-ounce silver coins.

The parents of the 5-ounce coins are the 1-ounce silver bullion coin and large silver commemorative coin in excess of one ounce. Silver bullion coins like the 1-ounce South African Krugerrand, Canadian Maple Leaf and American Eagle created a strong international appetite for silver beginning in the late 1960s, a few years after silver was removed from circulating coins worldwide.

This item broke the rules of coinage. Manufactured by the Franklin Mint, a major medal maker, it was marketed as the world’s largest silver coin and that is exactly what it was at that time.

A few detractors referred to it as a “hockey puck” but ironically, at 76 millimeters in diameter and with a weight of 156 grams, the size of a rubber hockey puck is much more similar to that of a typical 5-ounce silver coin.

In spite of the initial shock over its gargantuan size, many world coin collectors eventually added this coin to their collections. Encouraged by the response, Panama continued to issue them from 1971 to 1978.