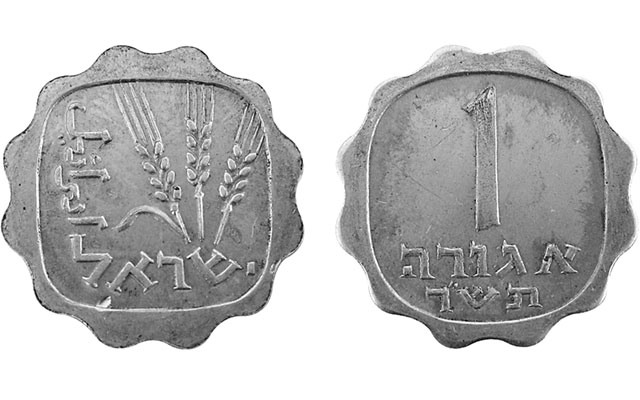 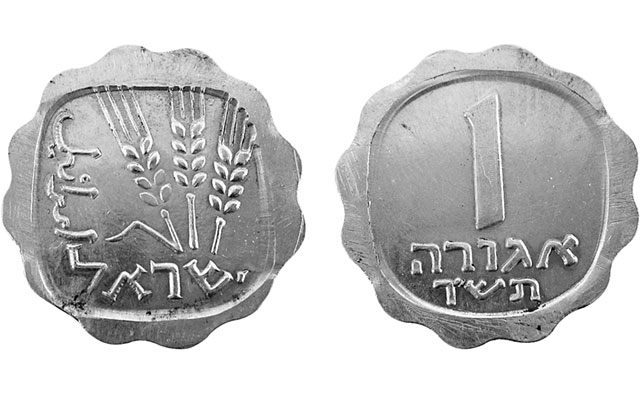 A unique example of the 1960 eight-grain pattern from Israel is offered by William Rosenblum in a Dec. 4 auction. The example is the only one of 10 known pieces to be struck in “coin turn.”

When Israel was working to issue a new series of coins in 1960, the design for a 1-agora coin was rejected and sent back for modification. This led to the creation of a very rare subtype — the 1960 “eight-grain” 1-agora pattern, of which 10 examples are known from five die marriages.

William Rosenblum’s No. 44B sale, set to close Dec. 4, includes two of these rare pieces, including an example that may be unique.

Imperial Chemical Industries in Birmingham, England, struck the patterns. The patterns show three stalks of grain on the obverse and the denomination on the reverse.

The Bank of Israel committee overseeing the designing of the coins sought to change the left stalk of grain, which depicted eight grains on the first pieces struck, to show 10 grains instead, the latter representing the adopted subtype. Five distinct die marriages were created during this process, with variations in sizes of lettering and the space between design elements the determining characteristics. Four marriages are cataloged by Art Kagan in Israel’s Money and Medals (1979).

One coin offered in the auction is of the die marriage identified as “Type II” in the Kagan book, only the fifth known example of that variety.

Two others were in the Kagan-Maremba collection, sold by Sotheby’s in 2012 on behalf of the Jewish Museum. Two others are in Israel, according to Rosenblum. The fifth coin is the one in the sale. It is graded Uncirculated, with “minor marks” on the reverse.

It is, according to Rosenblum, the only pattern of this die marriage offered for sale individually at auction in the United States. It was previously offered in Rosenblum’s sale No. 35D in 2005, when it realized $6,000. He estimates it at $5,000+ in the new auction.

The coin being offered as lot 221 in the current auction is a presumably unique piece that is not cataloged in the Kagan book. Rosenblum, following the cataloging system devised by Kagan, designates this pattern as Type V.

In addition, the “Type V” coin is struck in “coin turn,” where the obverse and reverse are 180 degrees inverse. Israeli coins typically are struck in medal axis or “medal turn” where both dies are in alignment, i.e., so that the holder of the item can rotate the object horizontally and have both sides “right-side-up.”

In a 2003 auction, Rosenblum sold the Type V piece that composes Lot 221 in this sale. Then, the Extremely Fine pattern realized $6,000.

Rosenblum calls the 1960 eight-grain patterns “Israel’s classic rarity.” He “very strongly” believes that both patterns in the auction are from the collection of the ICI Mint.