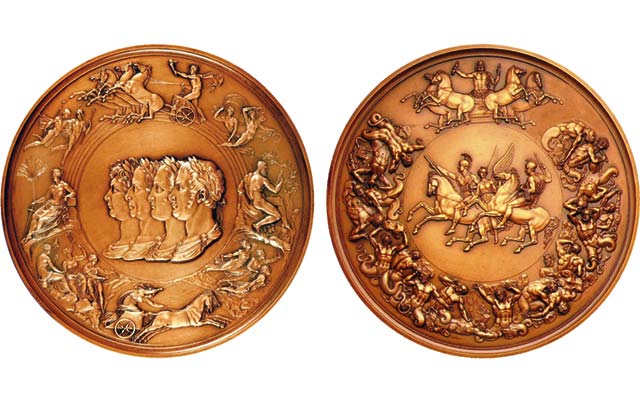 The following is the second segment from a feature article appearing in the June 2015 issue of Coin World Monthly.

Read the rest of the feature here

The Waterloo Medal is the “finest piece of intaglio engraving ever seen,” according to Marsh. “This masterpiece with its brilliant combination of allegorical and classical design enables Pistrucci to be described as possibly the greatest engraver ever.”

The obverse of the medal is elaborate, and Marsh’s description is suitably detailed and sufficiently eloquent to stand as the official description.

The obverse “depicts an allegory of peace, save for the center depicting busts of the four allied Sovereigns.”

“Surrounding the leaders is a scene of Apollo in his chariot restoring the day, Iris scattering flowers as the emblem of peace; the chariot is seen approaching the constellation Gemini that appears as usual in the form of a pair of youths, and is indicating the month in which the great contest took place. Castor and Pollux each armed with a spear denote the apotheosis of Wellington and Blücher. Themis, the goddess of Justice, appears on earth, as in the golden age; she is placed in front of the central busts to indicate that justice is greater than power, and a palm tree appears near her head; with some branches in one hand she is prepared to reward virtue, but in the other hand a sword is grasped ready to punish crime. Behind the busts the figure of Power is personified by a muscular bearded man armed with a club and seated under an oak tree. Beneath Themis the Fates appear and indicate that in the future human action will be controlled by justice alone, and these actions and passions are represented by the Furies which are cleverly placed beneath the figure of Power, and are thus subject to its influence. At the bottom of this side of the medal the figure of Night is introduced, the mother of the Fates, who is fleeing from Apollo.

“The reverse features at its center the mounted figures of Wellington and Blucher in the same classical style that Pistrucci introduced with his famous St. George and the Dragon design used for the sovereign. Wellington the victor is galloping in front, and the veteran Blucher is charging along at the rear to aid his companion and complete the destruction of the enemy. Between the two is placed the flying figure of Victory guiding their horses to the battle. On the outer edge and forming a border round the central group is a composition of figures; they represent the Giants, and have been struck down by Jupiter above, tumbling downwards in total confusion to indicate the confusion of the defeated enemy.”

But Pistrucci’s medal would never be given to the intended recipients. By the time it was finished, all four leaders depicted on the medal had died.