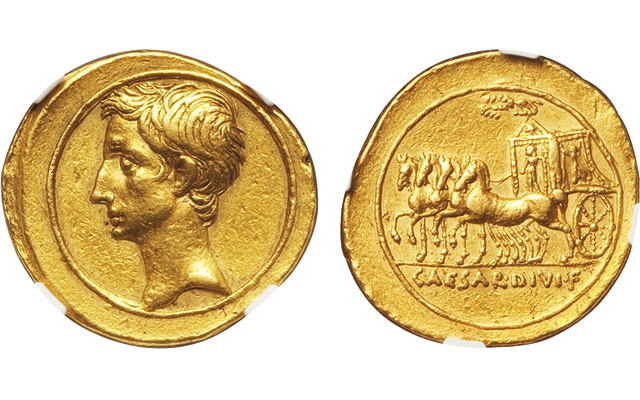 A circa 32 to 29 B.C. gold aureus of Augustus, or Octavian, the founder of the Roman Empire and its first emperor, represents a break from tradition by promoting the new republic over its ruler.

Octavian’s reign marked a departure from the coins issued by various moneyers of the Roman Republic, which reflected the desires of individual mint officials.

Octavian’s coins are “elegantly simplistic when compared with the often busy designs of the late Republic” according to Heritage.

The “triumphant” quadriga on the reverse is likely related to the Battle of Actium, which solidified Octavian as the sole ruler of the Roman Empire and marks the founding of the new republic. The imagery suggests that Octavian used the coins to proclaim that he was “finally realizing the legacy that began with Julius Caesar by re-founding the Roman Republic,” the auction firm said.

The coin is graded Extremely Fine by NGC, with strike 5/5 and surface 3/5.