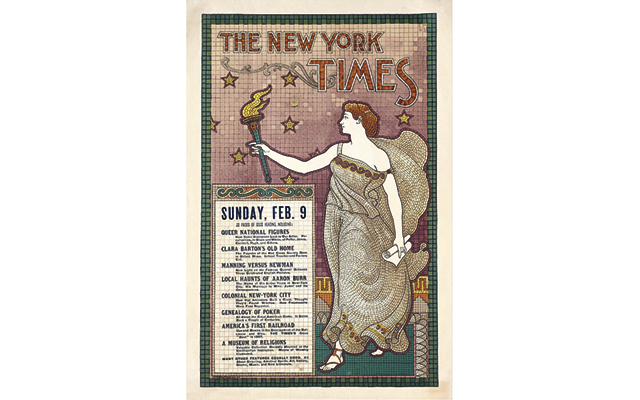 The varied shapes and flowing lines characteristic of the Art Nouveau style are seen on this Feb. 9, 1895, Sunday New York Times cover, which blends commercial lithography and letterpress.

Image courtesy of The Metropolitan Museum of Art.

French medallic art remained, as it had long been, the bellwether and model for the entire western world.

The first significant medals of the infant United States, the Comitia Americana series, were entirely French through their artists, designs and striking by the Monnaie de Paris, the Paris Mint.

The French Revolution that burst onto the world stage in 1789 began to free the French medal from the paralyzing rigidity of the tightly regulated medallic histories of Kings Louis XIV and Louis XV. The last years of Louis XVI and the appearance of the First Republic loosened many of the official restraints on medallic expression.

The swelling flood of medals chronicling the meteoric career of Napoleon brought some flexibility, but still retained many neoclassical forms. His varied successors, the restored Bourbon, the July Monarchy of Louis Philippe, the reign of Napoleon III, and both Second and Third Republics continued to rely heavily on classic imagery and restrained style.

Under this mind-set, medals were supposed to be round, displaying raised edges surrounding idealized portraits and allegorical scenes, employing figures frequently attired (or not) as ancients. Such classic images might include the nude portrayal of the victorious Napoleon that caused him much irritation, or an idealized upright figure of the gout-crippled King Louis XVIII, whose obesity made it difficult for him to stand at all.

Medals of Napoleon III (1852 to 1870) and of the early Third Republic were still mired in static classicism, which generally ignored the rapid industrialization of France and neighboring countries. However, introduction of the Janvier reducing machine set the stage for rapid change in medal design and production.

Using this specialized lathe, artists could now create their designs as large (10-inch and greater diameter) models, which could then be reduced to precise die size by the new machine. The days were coming to an end in which artists spent their careers hunched over steel die stock laboriously cutting their designs by eye and in reverse into the steel.

The time had arrived for the dramatic entrance of what became known as Art Nouveau. Medal student Mark Jones in The Art of the Medal (British Museum, 1979), attributes the successful takeover of the new form to carefully restrained steps taken by artist Jules-Clement Chaplain (born 1839, died 1909) and several of his contemporaries. Here was a medalist trained in the traditional methods, whose gradualist approach resulted in the successful shift from the neoclassical to Art Nouveau.

Typical of these is a plaquette of the Entombment of President Sadi Carnot, from 1898, by Louis Oscar Roty (born 1846, died 1911), remembered in the United States as the mentor of Victor David Brenner, famed for being creator of the Lincoln cent of 1909.

Art Nouveau rapidly transformed the world of the medal, but its reign was cut short by the firestorm of World War I. Innocence was abruptly out of fashion, and mothers kissing babies, languid bathers, praying farmers and studies of actress Sarah Bernhardt gave way to rapidly evolving scenes of modern war.