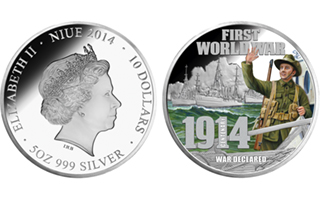 A new coin from Niue Island honors the centennial of Australian troops joining the war effort during World War I.

While America notably avoided World War I for several years, other countries like Australia were quicker to join the fight.

A new collector coin from Niue Island, issued through coin distributor Downies, marks the centennial of Australia’s joining the war effort. The Proof 2014 .999 fine silver $10 coin weighs 5 ounces and was struck by the Swiss company PAMP.

According to Downies, the outbreak of World War I was greeted with considerable enthusiasm in Australia. Even before Britain declared war on Germany on Aug. 4, 1914, Australia pledged its support alongside other states of the British Empire and almost immediately began preparations to send forces overseas to participate in the conflict.

The centennial commemorative coin’s reverse features a soldier boarding a ship from the first convoy of soldiers from Australia and New Zealand, who set sail from King George Sound in Albany, Western Australia, Nov. 1, 1914.

Each coin has individual numbering on the edge, matching its certificate of authenticity, and measures 65 millimeters in diameter. The mintage limit is 500 pieces.