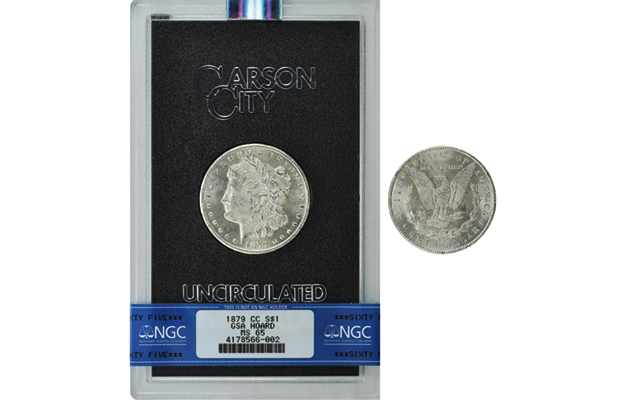 For each so-called rule in numismatics, there are exceptions.

For example, “Buy the coin, not the holder” is an oft-repeated adage. Three recent online auctions proved exceptions to this rule; for each, a silver dollar’s value was substantially enhanced by its holder.

Here's a profile of one of those three silver dollars:

The story: Collectors have long valued the Morgan silver dollars released in the 1970s by the Government Services Administration from government vaults, most of which were housed in the large black plastic holders.

GSA sales began in 1972 and some dates were extremely well-represented in the Treasury’s holdings. For example, of the 1884-CC Morgan dollar’s original mintage of 1,136,000 pieces, the GSA sold more than 950,000 of them.

The 1879-CC Morgan dollar is a tough semi-key to the series, having a relatively low mintage of 756,000, which, combined with the general popularity of Carson City Mint issues, creates demand.

In a Sept. 21 GreatCollections.com auction, an 1879-CC Morgan dollar still in its original black GSA box with an original numbered certificate brought $42,777.90. It was graded Mint State 65 by Numismatic Guaranty Corp., which will grade GSA dollars in their original black plastic GSA holders upon request.