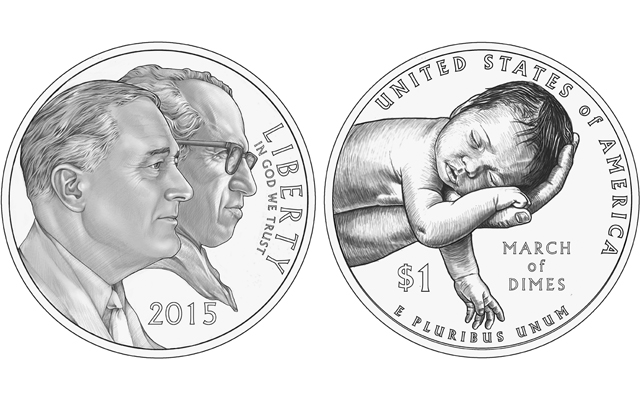 Designs approved for the 2015 March of Dimes 75th Anniversary commemorative silver dollar were unveiled Oct. 30 by the United States Mint and the March of Dimes Foundation.

Public Law 112-209, the 2015 March of Dimes Commemorative Coin Act of 2012, authorizes the Mint to strike and issue .900 fine silver dollars in recognition and celebration of the 75th anniversary of the establishment of the March of Dimes. The act calls for the bureau to strike no more than 500,000 coins combined in Proof and Uncirculated versions.

The coin’s designs are emblematic of the March of Dimes’ mission and programs, and its distinguished record of generating Americans' support to protect our children's health, according to the Mint.

The approved reverse design features a baby sleeping peacefully in the hand of its parent. U.S. Mint Sculptor-Engraver Donald Everhart II designed and will sculpt the reverse.

The approved designs were recommended May 19 by the Citizens Coinage Advisory Committee.

Pricing for the 2015 March of Dimes silver dollars will include a surcharge of $10 per coin, which the act authorizes the Mint to pay to the March of Dimes to help finance research, education, and services aimed at improving the health of women, infants, and children.

Pricing information for the coins will be announced prior to the coin’s release in 2015.