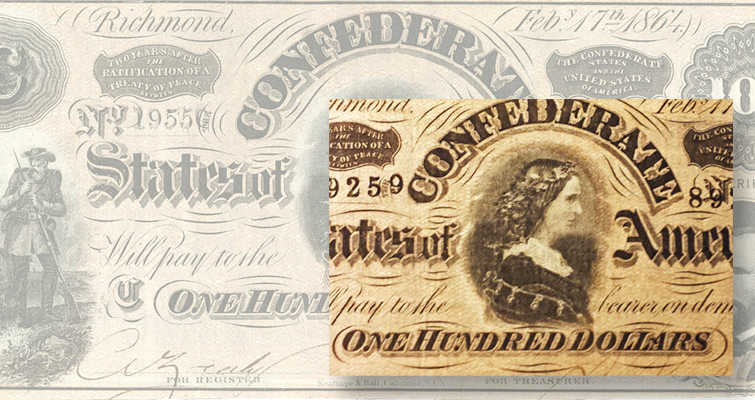 Lucy Pickens appears on 1862 $1 and $100 notes issued by the Confederate States of America.

As a matter of historical record, home hobbyists may collect paper currency from both the Union and Confederate States of America, imagining the Civil War and the hoarding of coins that gave way to paper money as a mainstay of both economies.

Current news events I mention here likely will have played out by the time you read this. But one seldom mentioned bit of historical news will remain: the appearance of a woman on the Confederate $1 and $100 notes, Lucy Petway Holcombe Pickens, also known as the “Queen of the Confederacy.”

This summer, Jack Lew, secretary of the Treasury, decided it was time for a woman to appear on the $10 bill. So many American women qualified for that honor, including human rights advocate and first lady Eleanor Roosevelt, civil rights hero Rosa Parks, and abolitionist Harriet Tubman.

Nonhobbyists may believe the woman to appear on our $10 bill will be the first in U.S. paper currency history. However, with their love of history, many hobbyists know that Pocahontas appeared on the back of an 1875 $20 national bank note and Martha Washington on the Series 1886 $1 silver certificate.

Lucy Pickens appeared on the Confederate $1 and $100 note in 1862. Pickens was the wife of South Carolina Gov. Francis Wilkinson Pickens, who took office shortly before that state was the first to secede from the Union. He also sanctioned the firing on Fort Sumter in Charleston Harbor in 1861.

Lucy Pickens was said to have watched the bombardment from a rooftop with others.

Before the outbreak of war, she reportedly agreed to marry Francis Pickens only if he became an ambassador. Smitten with her, he lobbied to become U.S. minister to Russia in 1858. There the couple befriended Czar Alexander II and spouse Maria Alexandrovna. The Russian royal duo became godparents to Pickens’ daughter, whom they called Douschka, which means “darling” in Russian.

Lucy Pickens received gifts from the Russian royal government, including precious jewels. During the Civil War, she purportedly sold them to help finance a unit of the Confederate forces.

While she became the CSA icon during the war, she rapidly was forgotten in the decades that followed, surpassed by other women who held different beliefs, including the aforementioned Tubman, abolitionist and author Harriet Beecher Stowe, and nurse Clara Barton, one of the founders of the American Red Cross.

This column is not really about Lucy Pickens. Nor is it about the woman on the U.S. $10 note, nor the Confederate flag at the South Carolina Capitol. It is about how our hobby educates us about history, prompting us to research the past by the coins and paper currency that represent it.