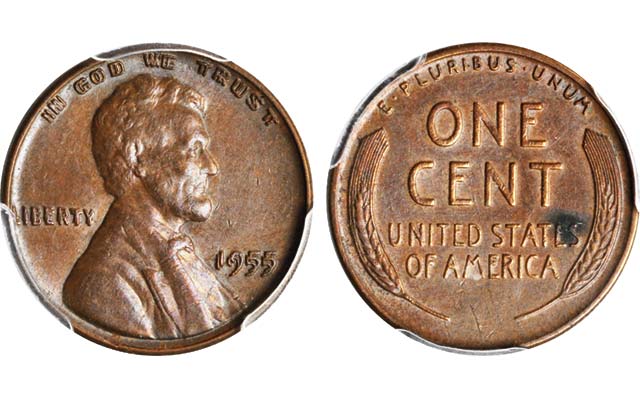 While many die varieties are esoteric and in the realm of error and varieties specialists, others are popularly collected within a series. These typically combine a variety that is visible to the unaided eye and availabilty in sufficient quantities to meet mainstream collector demand.

Below is one of three "mainstream" varieties that Coin World is profiling in its latest Market Analysis, and that each teach a lesson.

Certainly one of the most famous and dramatic doubled dies is the 1955 Lincoln, Doubled Die Obverse cent. The cent enjoyed a fairly large mintage and examples were discovered and publicized at the time of release, giving people plenty of time to find them and pick them out of circulation.

This example is graded About Uncirculated 53 by Professional Coin Grading Service. The obverse is handsome, toned “in an appealing blend of cobalt, pink, purple and medium brown,” per Stack’s Bowers Galleries, which sold the coin for $1,292.50 at a Feb. 2 auction.

Unfortunately, the reverse has a fairly prominent carbon spot that may have appeared after the coin was certified, since there can be a delay before a surface contaminant produces corrosion. This spot is likely reflected in the price, which is lower than other auction transactions of this coin in this grade.

The issue is also a favorite with counterfeiters, so collectors would be well-advised to seek third-party authentication for examples that they are thinking of adding to their collection.