Jackie O asks for 'mussed up' hair on Kennedy half dollar 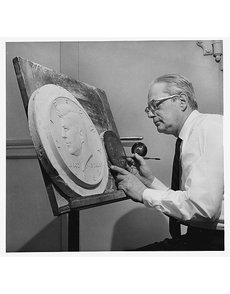 Gilroy Roberts is shown working on a plaster model for the obverse of the Kennedy half dollar. The portrait was originally created for Kennedy’s 1961 U.S. Mint Presidential medal. 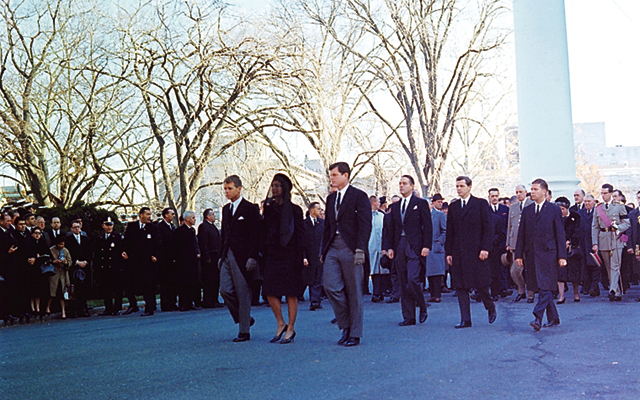 Members of the Kennedy family — the president’s widow and his brothers — lead the funeral procession in Washington in November 1963.

On Dec. 10, 1963, President Lyndon Johnson asked Congress to authorize the new Kennedy coin. The Associated Press reported, “If approved quickly, present plans are to have the coin in circulation early next year.

“The design — to be taken from a ‘presidential series medal’ now being produced in Philadelphia — is already in existence and little cost or delay would be entailed in making new dies, the White House said.”

The cost was estimated at $1,000. The bill quickly and nearly unanimously passed both houses of Congress. “Few House members, however, were willing to risk a vote at this time against anything carrying the Kennedy name.” Elston G. Bradfield reported in The Numismatist. Johnson signed the bill Dec. 30.

Mint officials, however, did not wait for formal approval of the legislation to make the necessary hub and die tooling, and start producing test strikes of the 1964 coins even before the bill became law. In his report to Adams on April 29, Gasparro wrote, “At 9 a.m. on Dec. 13th we struck our first trial (pattern) pieces.” That same day he flew to Washington to deliver the coins to Adams who, in turn, sent them to Treasury Secretary Douglas Dillon and President Johnson.

On Dec. 17, Roberts showed a prototype of the coin to the president’s widow. He told interviewer David Lisot in a videotaped American Numismatic Association Numismatic Profile in 1991, “They wanted Mrs. Kennedy to see — this is the portrait that is on the half dollar. And I had emphasized the part in his hair.

“He had a great shock of hair as you recall, and most artists, when they did a Kennedy portrait, they made a lot of this shock of hair, thinking that’s going to help them to make it look like Kennedy, you know. Well, they were right, but they had a tendency to overemphasize this part in his hair. And Mrs. Kennedy looked at the coin, and she said, ‘Could you muss up his hair a little bit?’

“All right, I thought, that was a wonderful criticism. She was a bit of an artist herself, and I think that aspect of the likeness was the first thought in her mind. It was very helpful, so I mussed up his hair and sort of half hid the part, made it less obvious, which helped. It was good criticism so I thanked her, too, for that helpful hint.”

The obverse design was revised to “muss” the hair and another trial strike made. Roberts flew to West Palm Beach, Fla., Dec. 27 to show the revised design to the Treasury secretary, who signed off on it.

Even before the coinage change became law, public interest was intense and growing. On Dec. 28 Mint Director Eva Adams said the Mint had received 8,000 letters in the previous week about the planned coin. “Thirty-one employees of the bureau are opening such mail and trying to answer it,” The Milwaukee Journal reported.

No patterns are known today, except for one mysterious piece that the late John J. Ford Jr. said he bought in a small mail auction Nov. 27, 1973. The aluminum piece — Pollock 2080 in the reference book on patterns by Andrew W. Pollock III — shows Roberts’ portrait of Kennedy on both sides and nothing else.

Ford recounted, “Tracing its history, I understand that it was originally found in an ash tray, in the bar of the Mayflower Hotel, Washington, D.C.”

Production dies were completed Jan. 2, and Proof production began almost immediately. Roberts reported that the first circulation-strike coins were produced at Denver Jan. 30. The Philadelphia Mint ramped up production the following week. Ceremonial first strikes were made at 11 a.m. EST Feb. 11 simultaneously at the Philadelphia and Denver Mints.

The ceremony was reported on front pages across the country, often accompanied by photos of the new coins. The first four from each Mint facility were given to President Johnson for presentation to Mrs. Kennedy.

The Associated Press report on the ceremony noted, “The Kennedy half dollar is not a commemorative coin. When 26 million are made, they will be released to the public — in March or April.”

On March 6, 1964, the Mint shipped the first coins to Federal Reserve banks. Public release was set for March 24.
Banks across the country were inundated and distribution limited. In Florida, the Sarasota Herald-Tribune reported local banks were allocated one coin for every $12,000 in deposits. A week before the release, the Planters Bank & Trust Co. of Hopkinsville, Ky., ran an ad in the Kentucky New Era telling customers distribution would be limited to one coin per person.

“You are invited to get your Kennedy Half-Dollar at any Planters Bank office — while our supply lasts,” the ad ran.
Supplies did not last long at the Treasury Department in Washington, D.C. The Associated Press reported, “The new John F. Kennedy half-dollar — 26 million of them — went on sale at banks throughout the nation Tuesday. Within two hours the U.S. Treasury was out of the 70,000 it had allotted its own cash windows.

“Shouts of anger and disappointment from the long line waiting outside greeted the announcement that the temporary supply was exhausted.”

The coin proved immensely popular. Banks across the country quickly exhausted their supply. Those lucky enough to get some found a ready market at home and abroad.

“Next it was found that people in many foreign countries also wanted the coins as keepsakes,” he wrote. “There were stories of people financing trips to Hong Kong with a few rolls of Kennedy halves. American tourists exchanging the halves, one or two, for a night’s lodging in the best hotels in Europe and a great underground network that was quietly sending the half dollars into the foreign market to meet the demand.”

Kennedy half dollars, even 50 years on, are still cherished by their owners.

In his 1999 memoir Walking with the Wind, Rep. John Lewis, D-Ga., a Civil Rights activist, wrote: “Kennedy represented hope and possibility to most of America, white and black alike, and when he died, that flame of optimism in all of us flickered just a little bit lower. To this day I have a place in my heart for him. When the Kennedy half dollars came out, I collected them, and I still collect them to this day. I have a box at home filled with them.”