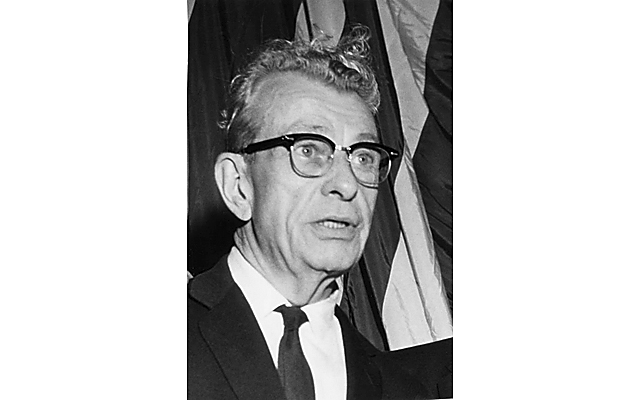 Sen. Everett Dirksen did not seriously oppose a Kennedy half dollar, but he did speak out on behalf of the Franklin half dollar the new coin would replace.

While there was no serious opposition to replacing Benjamin Franklin on the half dollar with John F. Kennedy, sonorous Sen. Everett Dirksen, R-Ill, took the Senate floor briefly Dec. 18, 1963, to “shed a few tears” for Franklin.

Dirksen, known for his deep voice, perfect diction and courtly attitude, rose from his seat, secured the floor and said, “I presume a case can be made for removing Benjamin Franklin from the half dollar and substituting the likeness of the late President Kennedy. Since we have the Lincoln penny, the Washington quarter, the Jefferson nickel and the Roosevelt dime, the half dollar is the only fractional coin that does not carry the likeness of a President.

“While I do not believe there would be any objection, this action would require a modification of the 1890 act, which provided that a change cannot be made before 25 years have elapsed, since Ben Franklin has been on the half dollar for only a period of 15 years.

“I do not say that this is a particularly hasty action, but I wish to shed a few tears for Benjamin Franklin.”

Dirksen reflected on the impact of Franklin’s message of “thrift and frugality” on the world before returning to the issue of displacing him from the half dollar.

He continued, “But I suppose times have changed. New philosophies abound. This is, after all, the decade of deficits. There is a belief that we can spend ourselves rich.

“Balanced budgets are old-fashioned. Why mind a rising public debt, since we owe it to ourselves? Thrift is for children with piggybanks. And frugality is ‘old hat.’

“So in the decade of deficits, perhaps Mr. Franklin’s idea that ‘a penny saved is two pence clear, a pin a day’s a groat a year’ is considered modern twaddle.

“It seems to me if Franklin must go — and it distresses me — I should shed a tear for him and for Poor Richard. When the federal deficit for fiscal year 1964 and the projected deficits for 1965 and for 1966 are pronounced, let us ponder that it was Franklin who said:

‘Get what you can, and what you get, hold
‘Tis the stone that will turn all your lead to gold …

“So as we make this change, I say ‘Goodbye Benjamin Franklin, apostle of thrift and frugality. Evidently you are not so popular in this age of the deficit.”

The Senate approved the change by a voice vote Dec. 18, with no formal objection.