John F. Kennedy half dollar a coin born from tragedy 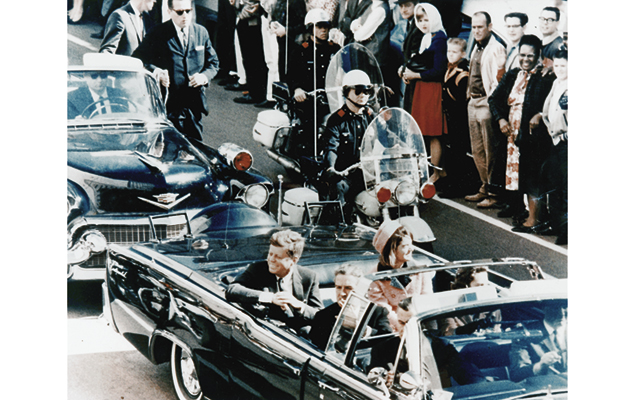 A news photographer captured this image of President Kennedy in the limousine in Dallas, Texas, on Main Street, minutes before the assassination. 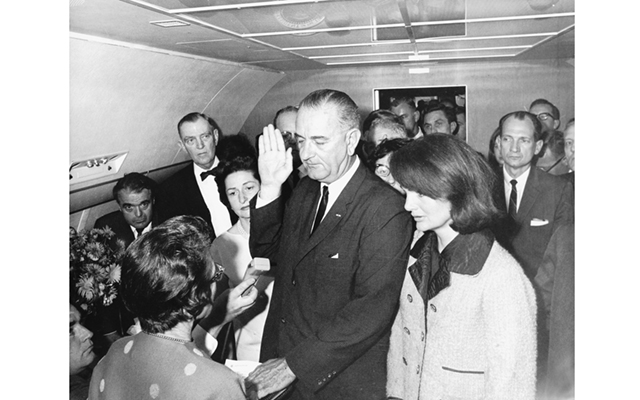 Lyndon B. Johnson taking the oath of office on Air Force One at Love Field Airport two hours and eight minutes after the assassination of John F. Kennedy, Dallas. 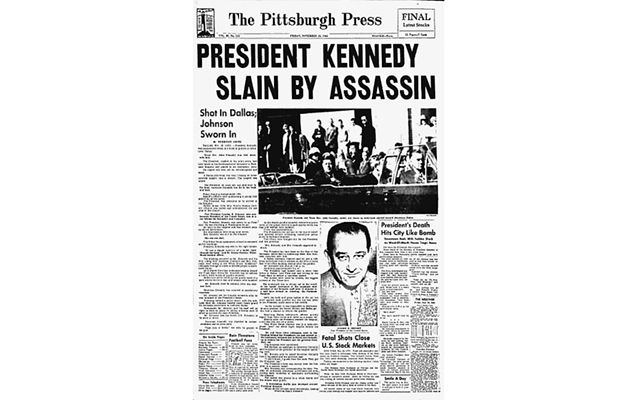 The front page of the Pittsburgh Press from Nov. 22, 1963, was typical of newspapers worldwide as they reported the shocking news from Dallas.

Image from the Pittsburgh Press.

The Kennedy half dollar was born in a time of terrible uncertainty 50 years ago.

Barely a year after the Cuban Missile Crisis, perhaps the closest the world has come to nuclear annihilation, President John F. Kennedy was assassinated by a sniper with ties to the Soviet Union.

A fearful nation mourned the passing of the popular young president. Across the country people were transfixed by television images as bulletins became all-day broadcasts about the murder, the arrest of the sniper, the killing of the assassin, and finally the president’s funeral on Nov. 25.

U.S. Mint Chief Engraver Gilroy Roberts, like most Americans alive Nov. 22, 1963, remembered where he was when he heard the news. “I happened to be at lunch and the news came over the radio that he had been assassinated. Of course, like everyone else, it was a great shock. I liked President Kennedy. His youthfulness and his promise of future great accomplishments were very strong,” he told interviewer David Lisot in a videotaped American Numismatic Association Numismatic Profile in 1991.

The Mint immediately began planning to honor the slain president. In an April 29, 1964, report to Mint Director Eva Adams, Roberts recalled, “Shortly after the tragedy of President Kennedy’s death, Nov. 22, 1963, Miss Eva Adams, the director of the mint, telephoned me here at the Philadelphia Mint and explained that serious consideration was being given to placing President Kennedy’s portrait on a new design U.S. silver coin.”

In his syndicated column, “Money Clips,” Mort Reed wrote about the decision. “Exercising whatever influence she may have had on the final decision, Mrs. Kennedy graciously objected to replacing Washington’s likeness on the quarter, and on Nov. 27, the mint was instructed to proceed with models for a new half dollar.”

Much of the work had actually been done two years earlier. Roberts modified the Kennedy portrait he had prepared in 1961 for the Mint’s presidential series medal. Frank Gasparro’s presidential-seal reverse was repurposed, too, from the same medal.

Roberts said the president had personally approved the medal portrait. The artist told Lisot, “And interestingly enough I showed him the original Mint medal portrait when I was working on it — and you know I had a strange feeling. I went to the White House. … Well, I went into his office and he’s a big man and he got up and extended his hand and I had a model with me and I said I’m here to have you view a portrait model that will be used as a medal for the U.S. Mint. … This is to honor you as a president of this great county and it’s a series of all the presidents and you’re the latest one and this is your portrait and I’m here to have your opinion on it.

“Well we went over toward the window, a little better lit, and he took it in his hand and he looked at it and he studied it for awhile, and he turned to me and said, ‘What do you think of it?’

“That kind of caught me a little bit short. I was very diplomatic — I thought that I was — and I said, ‘Well, Mr. President now that I’ve seen you, I think I could make a few changes on it.’

“I couldn’t get it out of him what he thought of it and I think he would have been happier if his wife had been there so he could ask her what she thought of it.”

Check back with CoinWorld.com for the latest posts from Gerald Tebben's profile of the Kennedy half dollar. Or, better yet, let us tell you when a new post is up: