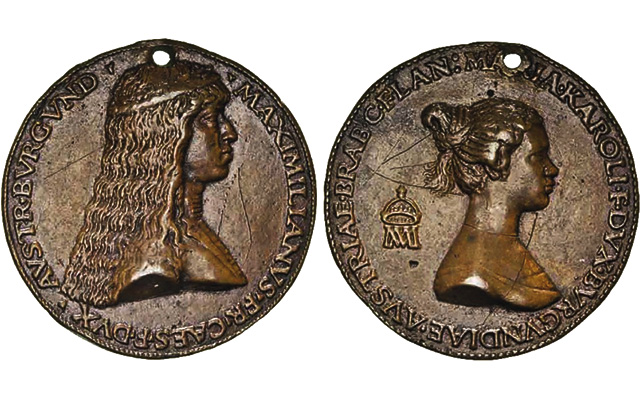 This cast medal issued circa 1477 for the wedding of Maximilian I and Maria of Burgundy was the inspiration for a later coin for the same couple. 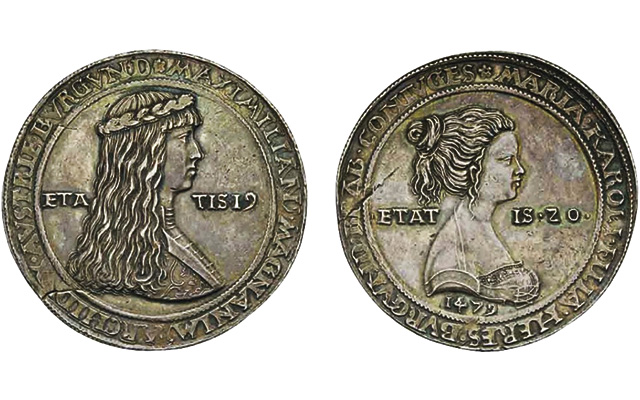 Though dated 1479, the schauguldiner or wedding taler of Maximilian I and Maria of Burgundy was issued after 1511, after the death of Maximilian’s second wife (Maria was his first wife). 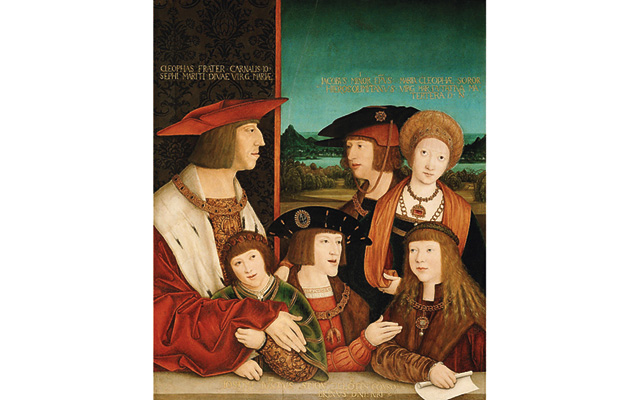 A 1515 painting, whose German name translates to Portrait of Emperor Maximilian and His Family, shows Maximilian I and Maria of Burgundy with their children.

Life may imitate art more than art imitates life, as Oscar Wilde proposed, but many times art imitates other art itself.

A pair of pieces offered in Morton & Eden’s Dec. 15 auction in London show the connection between art issued years and miles apart.

In 1508, Maximilian I became Holy Roman Emperor, leading an empire that dominated what is modern-day Germany but included territory that is now in France, Italy, and the Czech Republic, among other modern nations imprinted by the empire.

The motif was revived at least 34 years later, when a schauguldiner or “wedding thaler” was issued to mark the wedding. The wedding coin is dated 1479 but was struck after 1511.

The design of the coin is credited to Ulrich Ursentaler and the coin was struck at the Hall Mint in Austria.

The coin is often referred to as one of the most beautiful of all German coins, according to the auction firm, noting that it “fits in well with Renaissance medallic portraiture in that its inspiration comes from the Italian marriage medal of 1477 attributed to Giovanni Candida, an example of which is coincidentally offered in this sale.”

Maximilian and Maria had married at the ages of 19 and 20 years old, respectively.

The wedding taler, as the coin is known, was struck as a remembrance of Maria of Burgundy shortly after the death of his second wife, Bianca Maria Sforza. As with the medal, the couple face to the viewer’s right, though the coin necessarily has legal and commemorative inscriptions not required for medals.

According to Tom Eden of the firm, the Holy Roman Empire held sway in Italy in Renaissance times, so it is not unusual to find the emperor depicted by an Italian medalist, as is the case with the item offered in the auction.

“The design of that medal influenced the maker of the Austrian taler [which] is essentially an Austrian coin whose design is inspired by the Italian medal made some thirty years earlier,” he said.

The coin measures 41.9 millimeters in diameter and weighs 30.36 grams, compared to the 47.6 millimeter diameter of the 1477 cast medal offered in the auction (the auction firm could not provide the weight of the cast medal).

The medal is pierced with some graffiti and, according to Morton & Eden, is Very Fine with a brown patina. It realized £900 ($1,414 U.S.) including 20 percent buyer’s fee.