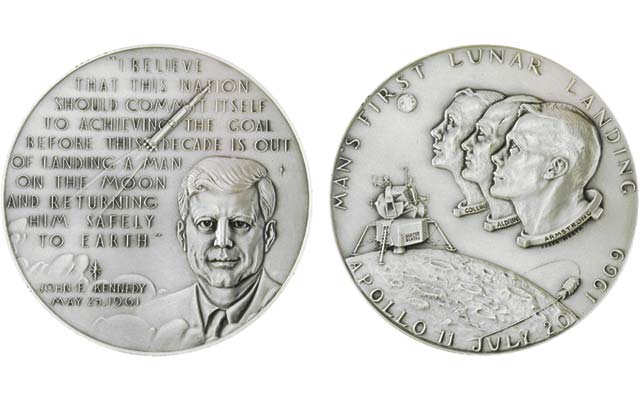 This is the first part of a feature by Rita Laws about the growth in popular 5-ounce silver coins around the world.

Three decades ago, you would have been hard-pressed to find a prediction that pure silver legal tender world coins weighing 5 ounces would be plentiful in the future. But thanks to the large silver medals and coins that preceded them, and to the popularity of bullion coinage, the “5-ouncer” has developed a loyal following.

Since 1986 when the world’s first 5-ounce true coin appeared, more than two dozen nations have joined this special coin club, including places on every continent except Antarctica. Most of these giants are marketed as bullion coins with collectible Proof versions also available, but some are made for only one market or the other.

When the United States Mint began producing them in 2010, 5-ounce coins officially left the label of “fad” behind for good.

Another reason they are here to stay is that their existence is not wholly dependent on the up and down value of silver. When the price of silver is low, investors and collectors want to buy them and when silver’s price is high, the attention silver attracts brings in new buyers and collectors. Furthermore, in addition to being a convenient way to buy bullion, buyers like them for the designs made possible by such a large surface.

Like so many coin types in numismatics, the present-day 5-ounce coin is the result of an evolutionary process with several contributing factors. A few are the creativity of the medallic arts, popularity of large silver commemorative coins, changes in silver purity levels, and the emergence of bullion coinage.

Big silver medals and medallic coinage are the grandparents of the 5-ounce coin. These are coin-like but not coins. To be a coin, an object must be legal tender with an assigned denomination in its nation of issue.

Medals have no legal tender value whether struck by private or government mints, but they do impact coinage design over time, especially when a medal type proves popular with collectors. Medallic coinage typically resembles the coinage of a nation by design, but bears no denomination.

Large medals ranging in silver weight from 3 to 5 ounces and more were regularly issued by many nations before 1986 and created a following among collectors of medals and those who wanted to collect or invest in silver.

Many of these went above and beyond the “coin silver” standard of .900 fine to the sterling standard of .925 fine. A few mints did something progressive for the times by producing medals made of truly pure .99 fine silver.

The Medallic Art Co. was one of many private companies making big silver medals throughout the final decades of the 20th century. A typical weight for one of these was 4.3 ounces, like the circa 1970 Kennedy and Apollo 11 medal. This medal was marked on the edge as being made of .999 fine (pure) silver.

The design was popular because it told the story of an important decade. On one side was a 1961 quote from the president saying that the United States should put a man on the moon before the end of the decade. The other side showed that very event and its date, July 20, 1969.