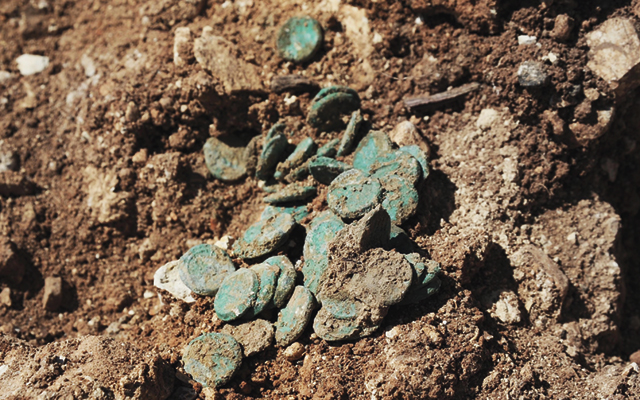 The hoard as it was found in the excavation during work on a highway project in Israel. 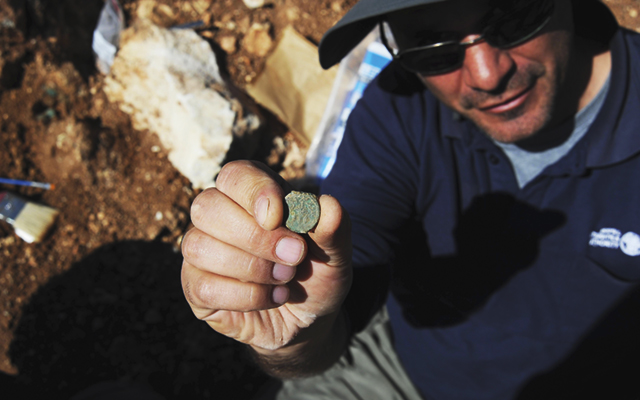 Pablo Betzer, Israeli Antiquities Authority District Archaeologist for Judah, poses with a coin from the Year Four of the Great Revolt. 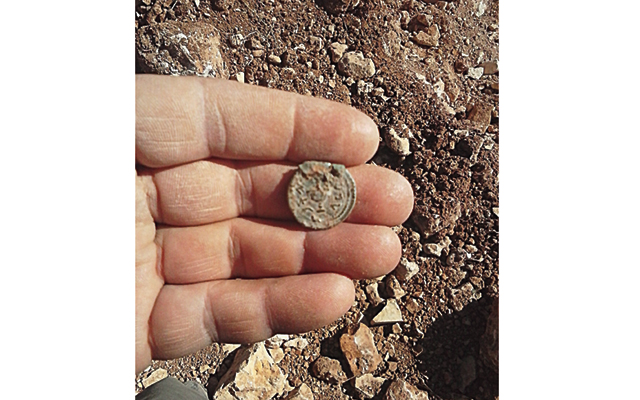 This eighth-shekel coin from the Year Four of the Great Revolt was among the 114 coins found in a hoard in Israel.

Artifacts including 114 bronze coins have been found among remains of a previously unknown settlement discovered during highway construction in Israel.

The Israeli Antiquities Authority confirmed to Coin World Aug. 18 that an ancient ceramic money box with the coins was discovered near the Jerusalem–Tel Aviv Highway. The coins were found inside a house in a previously unknown settlement from the Late Second Temple period. Pottery shards discovered by an IAA inspector several months ago led to the archaeological excavation where the coin find was made.

The coins date to Year Four of the Jewish Revolt. The revolt against the Romans began in A.D. 66 and eventually led to the destruction of the temple and the massacre of the Jewish resisters in A.D. 70.

Coins were issued for five years, and are available in multiple denominations. Expert David Hendin explores them in Guide to Biblical Coins, now in its fifth edition. Among coins issued in Year Four were bronze half, quarter- and eighth-shekel pieces.

According to Pablo Betzer and Eyal Marco, excavation directors, on behalf of the Israel Antiquities Authority, “Evidently someone here feared the end was approaching and hid his property, perhaps in the hope of collecting it later when calm was restored to the region.”

All of the coins in the hoard feature a chalice and the Hebrew inscription “To the Redemption of Zion” on the obverse, and a bundle of lulav (myrtle, palm branch and willow tied together) between two etrogs (citrus fruits).

Around this is the Hebrew inscription “Year Four,” indicating that the coins were struck circa A.D. 69 to A.D. 70.

According to Hendin, these Year Four bronze coins reflect the waning fortune and strength of the Israeli defenders. Earlier bronze issues have an inscription translating to “Freedom of Zion.” The change in legend may reflect “the Jewish insurgents’ realization that they would soon be defeated,” Hendin wrote.

The hoard was concealed in the corner of a room, perhaps inside a wall niche or buried in the floor. Two other rooms and a courtyard belonging to the same building were exposed during the archaeological excavation. The structure was built in the first century B.C. and was destroyed in A.D. 69 or A.D. 70 when the Romans were suppressing the Great Revolt.

Early in the second century, part of the building was reinhabited for a time, which culminated in the destruction of the Jewish settlement as a result of the Bar Kokhba rebellion. According to the IAA, “It seems that the residents of this village, like most of the Jewish villages in Judea, were active participants in both of the major uprisings against the Romans — the Great Revolt and the Bar Kokhba Revolt. As a result of their involvement the place was destroyed twice, and was not resettled.”

Officials of the IAA and Netivei Israel Company (the construction company) are considering whether it will be possible to preserve the village remains within the framework of the landscape development alongside the highway.