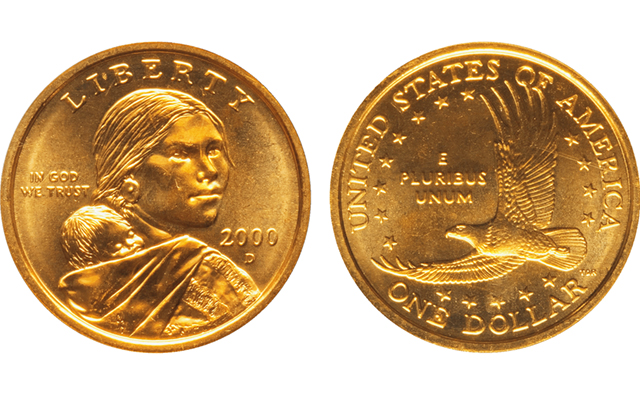 The 2000-D Sacagawea dollar in the 2000 Millennium Coinage and Currency Set has a special mirrored prooflike finish.

Sometimes in this column I talk about a fantastic auction result and explain why a coin is so desirable, why it went for so much money.

All the while, I overlook a great allure of modern coins: they can be very affordable. This month, I’ll highlight four historically significant modern coins that can be bought for modest sums.

??The 1970-D Kennedy half dollar — This coin is variously described as the last silver circulation-issue U.S. coin and the first Mint set-only issue. By 1970, the final year of the 40 percent silver Kennedy half dollar, there was little demand for this coin in circulation. This coin was included in Uncirculated Mint sets, however, and just 2.15 million were produced. Nice Uncirculated examples cost around $20.

??The 1996-W Roosevelt dime — Struck to commemorate the 50th anniversary of the Roosevelt dime, this coin was included in 1996 Uncirculated Mint sets. It’s still the only clad coin and only version of a circulating coin with a West Point Mint mark. Fewer than 1.5 million were struck, the lowest non-Proof Roosevelt dime mintage. An example in Mint set packaging can be bought for $20.

??The 2000-D Sacagawea dollar, “Millennium” Variety — Included in the Millennium Coinage and Currency set, this coin has a special mirrored prooflike finish. Just 75,000 sets were sold to celebrate the Millennium and the new dollar coin. When it was discovered the included Sacagawea dollar was special, the sets sold out in a flash. Its small mintage and distinctive appearance make this coin popular, but it’s still a great deal. Gem Uncirculated certified pieces can be purchased for $30.

??The 2007 George Washington dollar, Missing Edge Lettering — Rightly, in 2007 there was much ado about the edge lettering on the new, forthcoming Presidential dollar coins. The date, Mint mark and mottoes, IN GOD WE TRUST and E PLURIBUS UNUM, were all moved to the edge of the coin to allow for larger portraits. Collectors immediately found coins from the very first issue that had failed to pass through the edge lettering machine, leaving blank edges. The mintage of George Washington dollars without edge lettering is unknown, but it is certainly over 200,000, making them widely available. Average Uncirculated examples can be bought for around $40. So that you can see the difference, it’s worth buying a nice Uncirculated nonerror coin with edge lettering for just a couple dollars, as a companion.