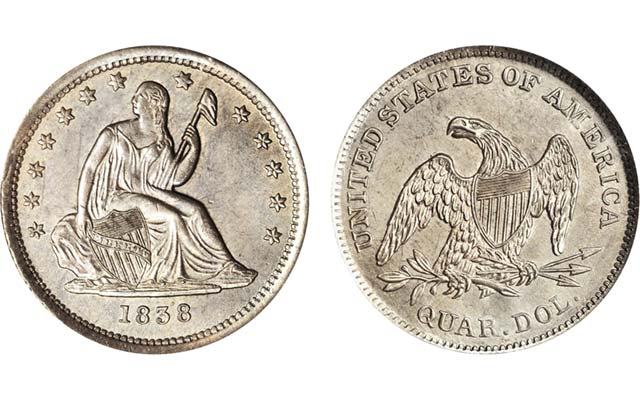 An 1838 Seated Liberty quarter dollar, first year of a motif that was continued (with some modification) through 1891.

For Whitman, I am putting the finishing touches on A Guide Book of Liberty Seated Coins. Here are a few paragraphs about the distribution of quarter dollars:

On Sept. 13, 1838, 20 of the new Seated Liberty quarter dollars were sent by U.S. Mint Director Robert Maskell Patterson to Secretary of the Treasury Levi Woodbury. Approval was granted, and minting for circulation began Sept. 29.

Quarter dollars were readily accepted in commerce, but were not seen as often as were dimes and half dollars. More plentiful through the end of the 1850s were Spanish-American 2-real or “two bit” coins that circulated for the value of 25 cents.

In 1849, the advent of large quantities of gold from California disturbed the traditional value ratio between silver and gold, and silver bullion rose slightly in value on international markets. This caused quarter dollars and other silver coins to be withdrawn from circulation to be hoarded or to be melted.

To remedy the situation, the Act of Feb. 21, 1853, lowered the amount of silver in Seated Liberty coins from the half dime to the half dollar (but not the dollar).

The first quarter dollars under the new weight standard were released on April 1, 1853. The new coins were widely reported upon in the newspapers.

By early 1862, the outcome of the Civil War was uncertain. To help fund government operations, the Treasury Department authorized legal tender notes — paper money with face values from $1 to $1,000 that were not redeemable at par in gold or silver coins. Concerned about the economy, the public hoarded these coins. By early summer 1862 all silver coins were gone from circulation. It was thought, after the Civil War ended in April 1865, that hoarded silver coins would come out of hiding. That did not happen. Citizens remained concerned about the finances of the government.

After April 20, 1876, silver coins and legal tender notes were exchangeable at par. A flood of long-stored silver coins came on the market. The result was a glut of silver that reduced the numbers of silver coins to be newly minted, beginning in 1879.

After Barber quarter dollars were introduced in 1892, Seated Liberty quarter dollars remained in circulation. By the 1930s when coin collecting became widely popular, such pieces remaining in commerce were heavily worn.