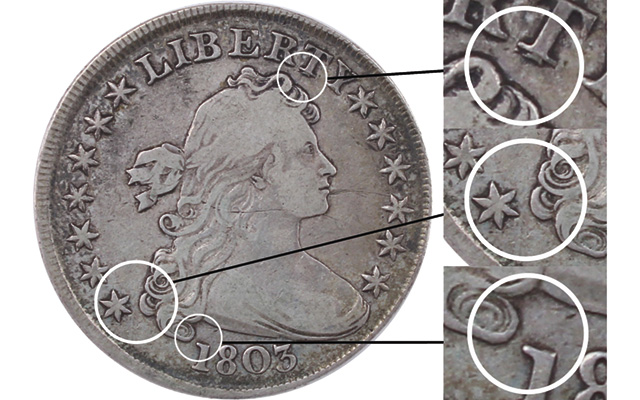 The discovery 1803 Draped Bust dollar with previously unknown obverse shows the T in LIBERTY repunched at its base; the first star is close to the bust and the 1 in the date is not close to the hair curl.

It is believed to be the first new early dollar variety attributed in more than two decades.

The coin, from an old collection, was presented by its owner to ICG senior grader/numismatist Randy Campbell for examination during the Oct. 30 to Nov. 2 Whitman Baltimore Expo.

The coin is reported to have original surfaces and be in Very Fine condition.

During the show, Campbell was unable to match the 1803 dollar to any known die combination in the Silver Dollars & Trade Dollars of the United States: A Complete Encyclopedia, Volume One, by Q. David Bowers, with Mark Borckardt.

Coins cataloged in the reference are attributed by Bowers-Borckardt or BB numbers.

Numismatist F. Michael “Skip” Fazzari, Campbell’s colleague at ICG, further studied the coin back at ICG’s offices and confirmed that the obverse die was unlisted.

Fazzari was able to determine that the new obverse was paired with Reverse Die B used to strike other coins in the series.

According to Fazzari, the reverse of the 1803 dollar submitted at the Baltimore show for attribution appears to be identical to the terminal die state reverse used on BB-255.

The new die marriage has been assigned the attribution number BB-257.

Borckardt says that this is the first early silver dollar variety discovered since a pair of new 1795 varieties were identified in the late 1990s.

Discovery of the new die marriage brings the total number of early dollar varieties to 119, not counting the later Proof only or 1804 emissions.

According to Fazzari, the obverse die is different from that used on any other 1803 dollar.

“The fact that this obverse has not been seen before may indicate the rarity of this die marriage,” Fazzari said.

Fazzari identified three differences from the die used for the other 1803 Draped Bust, Large 3 dollar (BB-255): the T in LIBERTY is repunched at its base on the new die; the first star is close to the bust rather than distant as on the other Large 3 obverse; and the 1 in the date is not close to the hair curl on the new die while on the other die, the 1 is closer to Liberty’s hair curl.