How does one value a coin with few comparables? 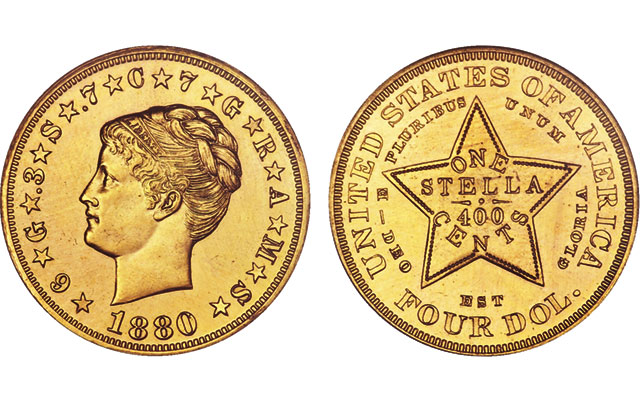 A gilt copper 1880 Coiled Hair $4 Stella pattern graded AU-50 Details, Whizzed, by ANACS is a challenging coin to value because of its condition and rarity. It brought $30,500 at an Oct. 9 Heritage auction.

Some coins are easy to value and trade at standard prices, while other coins are much more of a challenge.

This is generally due to a lack of comparable coins that have sold recently that can serve as benchmarks to provide evidence for the value of a coin.

Looking at the floor session auctions from Heritage’s Oct. 8 and 9 sales at the Professional Numismatists Guild New York Invitational show revealed several coins that provided a challenge for bidders.

A coin can be hard to price because it’s rare, has unusual problems, or both, as in the case of this 1880 Coiled Hair $4 Stella pattern coin. The piece is graded About Uncirculated 50 Details, Whizzed, by ANACS. At a casual glance the piece looks to be gold but is actually gilt copper, with a reeded edge. About a dozen examples of the 1880 Coiled Hair issue are known struck in copper, and many have been gilt.

The description notes, “Like most gilt coins, the luster is flat and mattelike, rather than flashy.” This flat luster may have led someone to harshly clean the coin by whizzing the surfaces to simulate luster. Despite the problems, it still sold for $30,550.

A large part of the demand for these gilt pieces is due to the rarity of the alternative. For comparison, a gold 1880 Coiled Hair Stella — one of roughly a dozen known — graded Proof 67 Cameo, sold for $2,574,000 at a 2013 Bonhams auction and even lower-grade Proof gold examples would approach the $1 million level at auction in today’s market, which favors rarities.

Another expensive coin that was anyone’s guess was an 1893-S Morgan dollar graded by Professional Coin Grading Service as Uncirculated Details, Cleaned.

What should serve as a valuation comparable for this piece? The cleaning left the surfaces unnaturally bright, but overall the piece has a pleasant look. The description notes that it would not be out of place in a high-grade collection of Morgan dollars.

The price difference between a Mint State and an About Uncirculated example is substantial. Two AU-55 pieces each brought $38,187.50 at Heritage auctions over the past two years and a solid AU-58 coin brought $80,500 at Heritage’s 2011 January Florida United Numismatists auction.

Using these comparables, the price realized in New York for the cleaned example — $47,000 — seems reasonable as it sits between the AU-55 and AU-58 value, but is roughly half of what a Mint State example without a “cleaned” designation would bring.