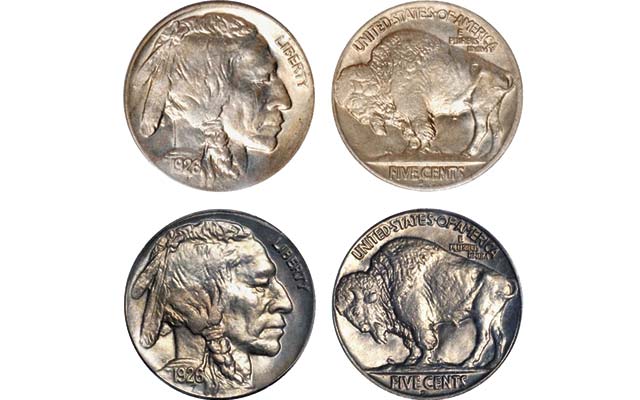 Which of these two 1926-D Indian Head 5-cent coins do you prefer, assuming Coin A, top, is certified Mint State 65, but the typical weak strike on the reverse (no fur details on bison’s head, for example), and assuming Coin B is certified MS-63, but has better eye appeal and a sharp strike? The numbers do not reflect desirability.

Does the highest grade number yield the best coin?

Recently in communications with Bill Fivaz and a few other authors who have written books for Whitman Publishing LLC we discussed the numerical grading system. This is not a new subject, of course, and I have probably focused on it 101 times in my columns since they started in 1961. The Official American Numismatic Association Grading System, based on William H. Sheldon’s 1949 system, holds that a coin with a 1 grade, or Basal State, worn nearly smooth, is at the bottom of the ladder. At the top is Mint State 70, or perfection.

Today, nearly all modern U.S. Mint commemorative coins, Proof coins, and other coins sold at a premium are graded 69 or 70. In contrast, no American coins dated prior to the 20th century have ever been graded MS-70, and for Colonial coins the highest grades are often Good 4 to Very Fine 30.

This concept is lost on many newcomers, who think that a modern MS-70 coin is something special, when in reality they are as common as sand particles.

Going beyond that, the numerical grade deals only with the amount of wear or handling a coin has received. I am at present working on the manuscript for A Guide Book of Liberty Seated Silver Coins, to be delivered to Whitman this summer. In the gathering of 1,148 images so far, with some left to go, I was reminded that numerical grade often has little to do with numismatic desirability.

To verify this go on the Internet and check out the coin images on various auction and other websites. Often, indeed very often, an MS-63 coin will be more attractive and sharper struck than an MS-65 coin!

Two other factors than the grade number can be equally important, in my opinion: (1) strike and (2) eye appeal.

A familiar example of a weakly struck coin is the 1926-D Indian Head 5-cent coin. Ninety percent or more are weak on the reverse, with details fuzzy. Today, a certified MS-65 coin can be weak and, to me, not worth buying, and an MS-63 can be sharp and a treasure!