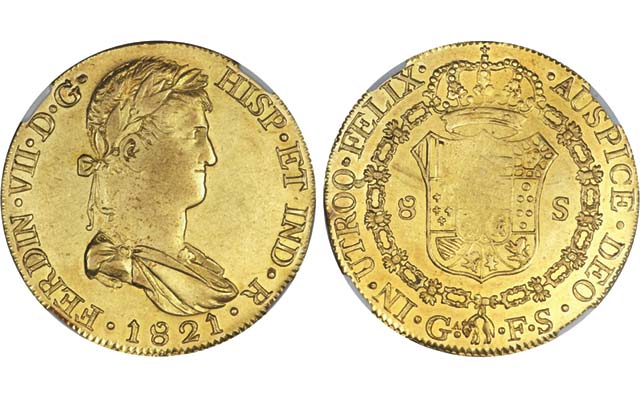 One of the offerings in Heritage Auction’s Aug. 10 to 14 sale of the first part of the Isaac Rudman Collection is an 1821 gold 8-escudo coin (doubloon) of Ferdinand VII, graded Mint State 62 by Numismatic Guaranty Corp.

Heritage Auctions will offer an extensive collection of all milled gold issues of Colonial Mexico from 1732 to 1823 in an August auction, the firm announced May 26.

The first part of the Isaac Rudman Collection of Mexican Coins is slated to be sold during the firm’s official American Numismatic Association auction from Aug. 10 to 14.

The Mexico City Mint is widely considered the most historically important minting facility of the Americas, having begun operations in 1536.

According to Cristiano Bierrenbach, vice president of Heritage Auctions, Rudman’s collection of milled gold coins is basically a complete date run of all denominations, from half-escudo to the 8-escudo piece, including varieties.

Rudman assembled the collection during the past four decades, Bierrenbach said in a press release.

Highlights include a full set of all confirmed issues of the War of Independence provisional Guadalajara Mint, including the Norweb example of the 1812 4-escudo piece. The latter represents only the second public offering of the type in over 70 years.

Additional parts of the collection will be presented in auctions throughout 2016.