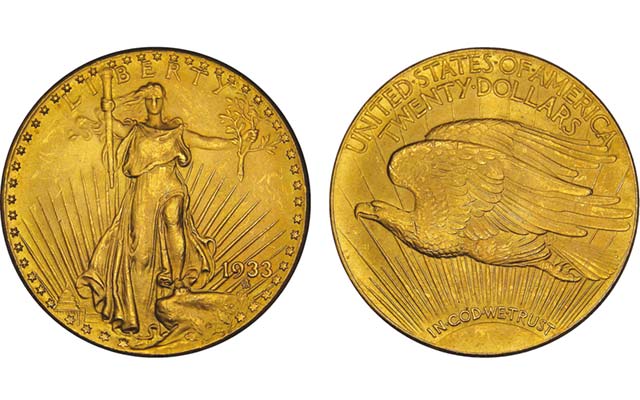 The government contends that it should not be prevented from recovering coins from “the family of a thief” in its latest filing, continuing the ongoing saga of the 10 1933 Saint-Gaudens gold $20 double eagles that turned up in a Philadelphia family’s safe deposit box in 2003.

Attorneys for the government filed a brief in federal court on July 1, requesting a rehearing of the April 17 decision of a three-judge panel in the Court of Appeals for the Third Circuit who reversed a July 21, 2011, jury verdict and subsequent order from the District Court that held that the coins were government property.

The Langbord family, who found the coins, are descendants of a Philadelphia coin dealer investigated by the Secret Service in the 1940s for selling additional 1933 double eagles into the marketplace.

In its conclusion, the government’s brief states, “The Langbords suffered no harm at all, having received exactly the procedural protection they sought — a judicial proceeding in which the government bore the burden of proof.” It warns that by ignoring the jury’s unanimous decision that the coins were stolen from the U.S. Mint, “the Langbords stand poised for a staggering windfall based on their ancestor’s crime, at great harm to the United States.”

In the most recent filing the government uses much stronger language than previously seen, unhesitatingly labeling Philadelphia coin dealer Israel Switt a thief and stating the Court of Appeals’ April 17 ruling produces “a miscarriage of justice in this particular case,” adding that it also significantly misreads civil forfeiture statutes in a manner that does substantial harm to the ability of the United States to protect its own property and to pursue forfeiture under applicable law.” The government states that the Appeals Court’s decision to vacate the jury’s verdict and subsequent judicial order is inconsistent with laws that protect the property interests of the government and the operation of forfeiture laws.

The brief opens with some historical background on the 1933 double eagles, of which 445,500 were struck but nearly all were melted upon President Franklin Roosevelt’s order to stop issuing gold coins. Beyond the two examples in the National Numismatic Collection at the Smithsonian Institution and one that was monetized and sold for a record $7,590,020 at public auction in 2002, other examples of this rarity survived and remain at large. The government states that these at large examples “were stolen from the Mint by its cashier, George McCann, abetted by Israel Switt, a Philadelphia merchant and coin dealer, who over time sold some at a significant premium while hoarding the rest.”

The government adds, “Shortly after the 2002 sale of that one coin, Joan Langbord, the daughter of the late thief Israel Switt, announced that she discovered 10 more 1933 Double Eagles in her safe deposit box, and she wanted the same deal that the collector had just enjoyed.”

Through attorney Barry Berke, who had represented the owners of the coin that sold in 2002, the Langbord family surrendered the coins to the U.S. Mint for authentication. The Mint agreed that the submitted coins were authentic, but kept them as government property. The government contends that it “has never relented in its effort to recover this stolen government property.”

‘The family of a thief’

Before the 2011 jury trial, the District Court agreed that the government did not have to initiate a forfeiture proceeding under the Civil Asset Forfeiture Reform Act, but that it should have afforded the Langbords greater due process once they requested that the coins be returned.

At the two-week-long jury trial in Philadelphia in 2011, the government established that the coins were stolen from the Philadelphia Mint and the jury ruled in favor of the government on the forfeiture claim. Following the verdict, District Judge Legrome D. Davis entered a declaratory judgment stating that the coins were not lawfully removed from the Mint and remained property of the United States, regardless of the applicability of CAFRA.

The Court of Appeals vacated the jury’s decision and Judge Davis’ declaratory judgment, finding instead that the government had to file a judicial action within 90 days of when the Langbords sought return of the coins. The government concludes, “On that basis alone, the [Appellate Court’s] majority holds that the stolen coins must be returned to the family of the thief.”

The government contends that the Third Circuit’s decision — which was not unanimous, with a strong dissent from one judge — strips the government of its right to defend title to its property because the judicial forfeiture action was not filed within 90 days of receiving the Langbords’ seized asset claim.

The government also identifies what it calls errors in the Third Circuit’s majority opinion that result in a “miscarriage of justice.”

The first error is that the court erred in not recognizing that the government acted in this case not as a law enforcer, but as a property owner, with the government reiterating that it did not act to forfeit the coins because they were stolen government property. This is because when the government finds and recovers actual property stolen from it (as opposed to proceeds from the sale of stolen property), it does not forfeit it. It instead acts to recover it.

The government states that nothing in CAFRA provides that forfeiture of property is the government’s only remedy to recover property, “in other words, giving the government fewer rights with regard to its own property than any other entity or individual in the world has with respect to property located in the United States.”

The brief looks at the situation in a broader context, noting that numerous doctrines provide that the government cannot “inadvertently or through negligence lose title to its property.” A footnote adds that should the Court of Appeals’ ruling stand, “we would be left with the bizarre result that the government has fewer rights with regard to stolen property than with regard to property it merely misplaced.” Further, in examining the intent of Congress in establishing CAFRA, the brief states, “It is untenable to assert that Congress meant in this fashion to specifically and severely restrict the government’s remedies in recovering property stolen from it.”

The government concludes that by imposing CAFRA’s “extraordinarily short limitations period on the government’s ability to quiet title to its stolen property,” the Court of Appeals singles the government out for “uniquely disfavorable treatment,” without a statutory basis and in a manner that conflicts with many principles on governmental rights.

The government points out that the Appeals Court’s majority decision concludes that CAFRA constitutes a “special statutory scheme” that prevents the government from utilizing other remedies to keep its property. The brief states, “This Court has previously made clear that forfeiture need not be pursued where another basis for retention of property exists.”

The brief warns, “If left to stand, the majority’s conclusion will have profound consequences, limiting the government in matters involving stolen property — even the greatest national treasures — to the strict and narrow time limits of CAFRA. Those restrictions are placed on no other property owner when taking action against a thief or, as here, against those who claim to have inherited stolen property from a thief.”

The brief then explores that historical power of the government to forfeit property used in or obtained through illegal activity, noting that this government power provides an important means of deterring and remedying misconduct. It characterizes that Appeals Court as rewriting an important part of the forfeiture laws “in a manner that will disturb long-settled and congressionally approved procedures in countless cases.”

A footnote places the situation in a non-numismatic context, looking at how the ruling would impact seized evidence used in a criminal investigation that is seized without any intention to forfeit. The brief states, “the majority’s opinion may be read to allow any criminal suspect, upon the seizure of evidence, to compel a forfeiture action on his own by filing a seized asset claim, creating mischief and untold burdens on the government and the courts.”

The government contends throughout that not every seizure starts a forfeiture, and that the Langbord family’s request for the coins’ return does not trigger CAFRA’s 90-day deadline for filing a judicial forfeiture action. The brief warns that “the panel majority’s novel construction of the statute threatens to throw the government’s federal civil forfeiture program — a longstanding, nationwide, law enforcement program — into procedural chaos while, at the same time, unduly limiting the prudent exercise of government discretion deciding whether to pursue civil forfeiture of property that it has taken into custody.”

After explaining that the government should not be limited only to a forfeiture remedy to recover its own property, the brief states, “The Langbords should not receive the gold pieces that their ancestor stole and hid, and profit by millions of dollars, on property stolen from the United States government.”

The government requests that the Third Circuit’s decision be reconsidered and reversed, with title to the stolen pieces confirmed in their rightful owner, the people of the United States. On July 6, the Langbord family was ordered to file an answer within 14 days, limited to 15 pages.