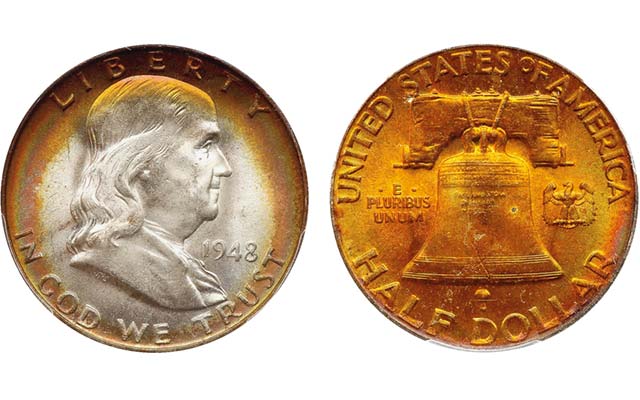 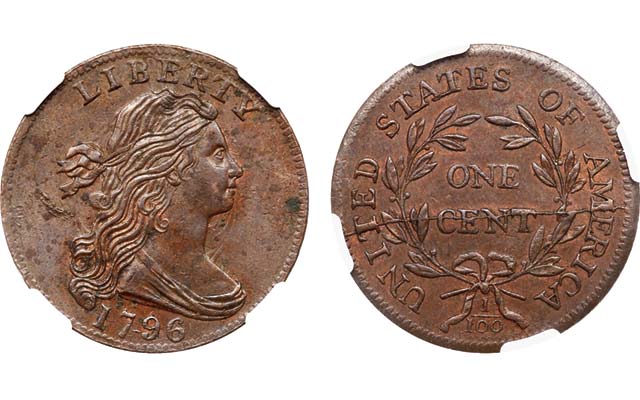 A newly discovered 1796 Draped Bust cent, Sheldon 96, will cross the auction block in Los Angeles on May 31.

A diverse range of U.S. rarities from the 18th century through modern times, including a noteworthy discovery, are set to cross the block at Ira and Larry Goldberg Coins and Collectibles Inc.’s Pre-Long Beach Auction, May 31 to June 1.

The sale will be held at the firm’s Los Angeles offices before the Long Beach Coin, Currency, Stamp & Sports Collectible Show, set for June 4 to 6 at the Long Beach, Calif., convention center.

A modern highlight is a 1948 Franklin half dollar graded Mint State 67 full bell lines by Professional Coin Grading Service. It is notable both for its clean surface preservation with bold strike and for its wild color. The obverse shows handsome rainbow toning at the rims and the reverse is enveloped in more dense, uniform and rich orange-gold color.

For reference, another PCGS example in this grade with a green Certified Acceptance Corp. sticker, but with more gentle pastel toning, sold for $8,225 at Heritage’s April 23 Central States Numismatic Society auction. At a 2003 Bowers and Merena auction a PCGS MS-67 FBL example sold for an astounding $28,750.

Another highlight is a 1796 Draped Bust, Reverse of 1795 cent, Sheldon 96 as cataloged by William H. Sheldon in Penny Whimsy. It is the rarest of the numbered varieties of 1796 cents.

As Coin World’s Paul Gilkes reported in the April 27 issue of Coin World, it tops the second-finest known piece by more than 50 grade points and he cited large cent specialist Bob Grellman who said that the new discovery is the 24th example known of the S-96 die marriage.

The variety is noteworthy in that it has a strong die crack that bisects the reverse that is visible without magnification. The description explains, “This reverse suffered the bisecting crack very soon after the die was placed into service, and the early failure accounts for the rarity of the variety.”

The cent was offered as part of English auctioneer Woolley and Wallis’ Jan. 21 auction of Silver, Coins and Medals where it was offered — unattributed — with an estimate of £500 to £700. There, it was graded in traditional conservative European fashion as, “Overall a pleasing very fine with little actual wear, but obverse shows signs of being struck over a reverse, with hints of the wreath, and somewhat spotted, the reverse with die flaw from T of UNITED, through CENT and on to the right upright of the M of AMERICA.” It sold for £48,000 ($72,707 in U.S. funds).

Gilkes wrote that the piece was acquired by Thomas Paul’s American Heritage Minting in Jenkintown, Pa., and was graded Mint State 63 brown by Numismatic Guaranty Corp. It subsequently was crossed, similarly graded, to a Professional Coin Grading Service holder.

Paul said he stumbled across the coin while surfing the Internet in January. The auction lot was listed out of sequence in regard to the other coin lots and only offered an obverse photo of the coin without attribution as to die variety. The firm Woolley and Wallis provided Paul with an image of the reverse.

The cent will be offered at the Goldbergs’ May 31 auction where it carries an estimate of $200,000 and up. The catalog entry notes, “Collectors of high grade or choice 1796 cents have been forced to settle for a significantly inferior example — or do without the variety altogether.”