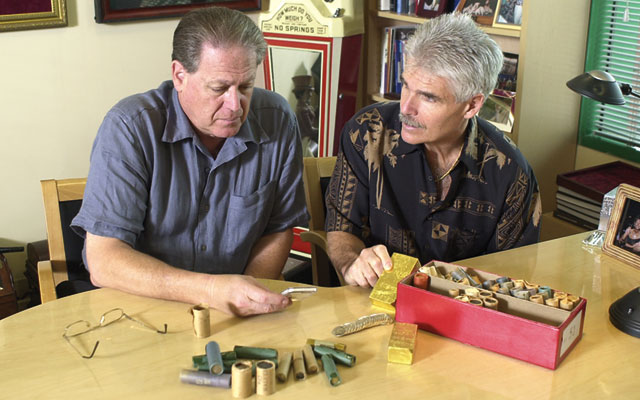 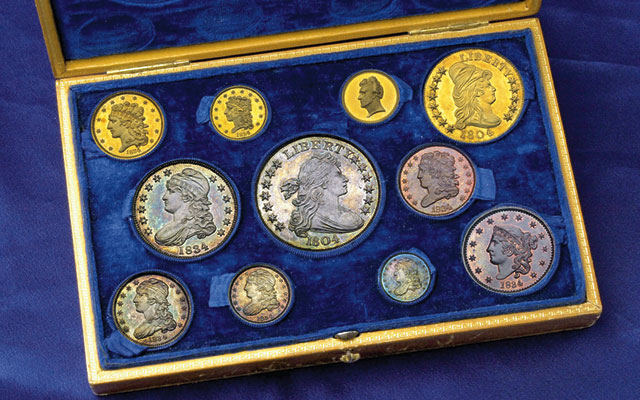 The Goldbergs have handled the sale of the King of Siam set three different times — once privately and twice at auction. 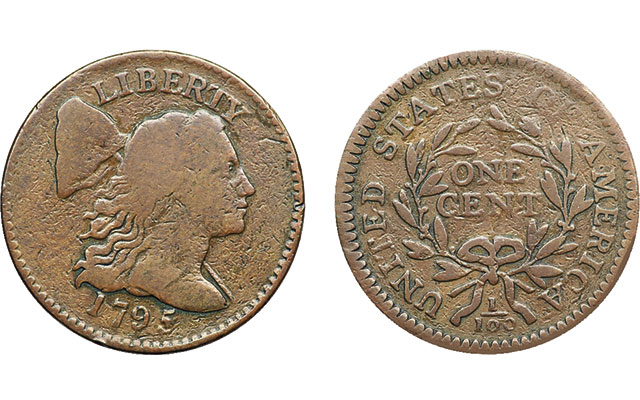 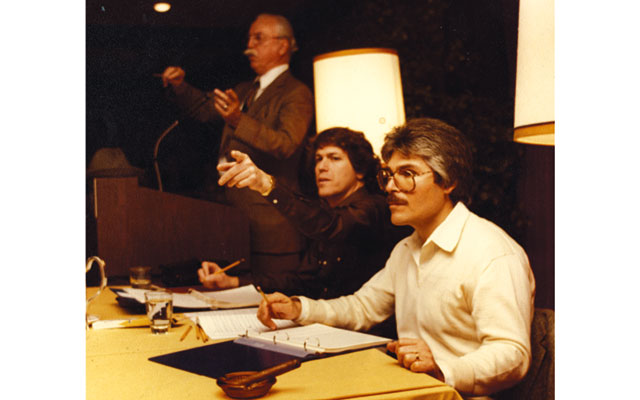 During a Superior auction in the 1970s, Larry Goldberg points the location in the auction room of a bidder while Ira Goldberg surveys the floor for the next bid.

This is the third of six profiles of seven numismatists who have been in the hobby professionally more than 40 years and which was first published in the April 6 Monthly edition of Coin World. Additional profiles will appear in the April 13, April 20 and April 27 Weekly issues.

Cousins and business partners Ira and Larry Goldberg have been professional numismatists for more than 45 years each, spending most of their hobby careers with Superior Stamp and Coin Co. and then Ira & Larry Goldberg Coins & Collectibles Inc.

Larry and Ira follow in the numismatic footsteps forged by their grandfather, Isador Goldberg, with Superior’s founding in Los Angeles in 1931. Ira’s father, Marshall, and Larry’s father, Harold, joined Superior in 1945 upon their return from military service during World War II.

Ira and Larry joined the family business in their adolescence in the early 1950s, cleaning floors, soaking stamps off covers and making stamp packets, while developing their interest in coins.

Larry recalls he appreciated the attention he could give to his interest in coins while sorting, grading and organizing the inventory. He said he enjoyed selling to clients and acquiring coins needed if they were not in Superior’s inventory. This was especially important in building type sets of U.S. coins, he said.

Buying for Metcalf in the 1960s meant spending millions of dollars to acquire pieces from the holdings of collector A.J. Ostheimer. The purchases included Ostheimer’s Bust dollar collection, which held a Mint State 1794 Flowing Hair dollar. Another significant purchase on Metcalf’s behalf was an 1870-S Seated Liberty dollar.

During the 1960s when the government was emptying its vaults of silver dollars, Superior handled numerous 1893-S and Carson City Mint Morgan dollars.

Larry Goldberg said that during this period he was being paid roughly $5 a day.

“This was the first time I ever met him, and I said who I was, and he started telling stories to me about my Aunt Rose who used to run our coin department,” Larry Goldberg said. “I remember telling this story to Ira and Dad and said we need to get well known in this industry. Again, we had a lot of great clients, but no one knew our firm outside the Los Angeles area. We thought that being in the auction business would put us on the map.”

The first Superior auction was conducted on Sept. 24 to 26, 1970, and featured the Dr. A.F. Pradeau Collection of Spanish Colonial, Mexican and U.S. coins.

Auction attendance was high. Bids were all entered into the auction ledger by hand. Invoices were written out, Goldberg said.

Auction competition during the 1970s was fierce, according to Larry Goldberg, as auction houses sought the contract for the annual American Numismatic Association anniversary convention sale.

This led to Superior, Stack’s Rare Coins, Rare Coin Company of America (RARCOA), and David W. Akers Inc. collaborating from the late 1970s into the early 1990s in a series of auctions known as the Apostrophe Sales (i.e., Auction ‘85). The four firms formed the joint auction because they had not been selected to conduct the official ANA auction for the summer convention in those years.

Superior continued separately with great auctions through the 1980s and 1990s that included the Robinson S. Brown Jr. Collection of U.S. Large Cents, Goldberg said. Collectors wanted auction catalogs with “superior” photographs. The auction company focused on the desires of a potential bidder.

However, printing the catalogs took a lot of time and effort, particularly for photographing and cataloging items. New technology eliminated the costly and time-consuming use of photographic film, replacing it with high-quality digital images. Current auctions conducted by Ira & Larry Goldberg, Auctioneers, often have about 50 floor bidders with the rest participating online or by phone. Larry Goldberg said quality digital photographs have revolutionized the auction world, making it possible for potential bidders to view the lots online or in a print catalog rather than having to make a trip to examine the coins in person.

Larry Goldberg said there will come a time when the print catalog will be a thing of the past.

Since 1970 when Superior conducted its first public coin auction, the Goldbergs have handled countless numismatic rarities, including the collections of famous personalities, such as actor Buddy Ebsen, violinist Jascha Heifitz and Los Angeles Lakers owner Jerry Buss. And there’s also the Proof U.S. gold coin collection of businessman Ed Trompeter, which went to auction by Superior in the early 1990s.

The 1894-S Barber dime, 1913 Liberty Head 5-cent coin and Class I 1804 Draped Bust dollar sold by Superior in 1985 as part of the Buss Collection had been acquired for Buss earlier by Ira Goldberg with Buss’ authorization, written on a hot dog napkin while both attended a Lakers home game.

In its June 1, 1999, sale, the Goldbergs set a record with the first gold coin to break the $1 million barrier, when they sold a 1907 Saint-Gaudens, Ultra High Relief, Roman Numerals gold $20 double eagle for $1.21 million.

On May 28, 2009, the Goldbergs auctioned The Millennia Collection, which realized more than $24 million, the most an auction of world coins had brought in a single day.

The Goldbergs have handled the sale of the King of Siam set three different times — once privately and twice at auction. In 2008 at auction, the set brought a record-breaking $8.5 million.

On Sept. 6, 2009, in the first of four sales involving the collection of large cent collector Dan Holmes, the Goldbergs auctioned a 1795 Liberty Cap, Reeded Edge cent for $1,265,000, the highest price ever paid at auction for a copper coin.

Both cousins have been members of the Professional Numismatists Guild since 1969 and are lifetime members of the American Numismatic Association. Ira served 10 years on the PNG Board and as its president from 1993 to 1995.

Both received Lifetime Achievement Awards in 2011 from the American Numismatic Society for their contributions to numismatics.

The Goldbergs have both served as consultants for the Columbus-America Discovery Group for the treasure salvaged from 1988 to 1991 from the SS Central America. The Goldbergs are also among the partners with Dwight Manley in the California Gold Marketing Group for the promotion and sale of treasure from that ship.