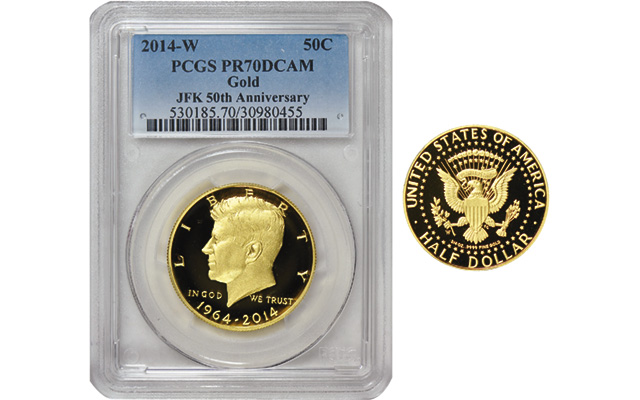 The 2014-W Kennedy gold half dollar has had a rocky year. This example, graded PCGS Proof 70 Deep Cameo, brought less than the current issue price from the U.S. Mint in a Nov. 23 auction.

The story: It has been a rough few months for the 2014-W Kennedy gold half dollar. The U.S. Mint had high expectations for the gold half dollar when it launched the novel coin this past August at the American Numismatic Association World’s Fair of Money.

Unfortunately, both the Mint and the coin received negative attention from mainstream media, following the huge premiums paid for the limited number of coins released at the show, and this has seemed to dull collector excitement for the issue.

With the falling price of gold during the time period, the prices for these half dollars have declined over the past several months. As of Nov. 16, just 66,859 have been sold (it’s telling that a majority of the sales came in the first few days).

For those looking for an example for their collection, they are currently less expensive in the secondary market than from the U.S. Mint. For example, on Nov. 25 the Mint was charging $1,165 for one. Alternately, a Professional Coin Grading Service Proof 70 Deep Cameo example sold for $1,101.10 at a Nov. 23 GreatCollections.com auction.