Gold a longtime synonym for value 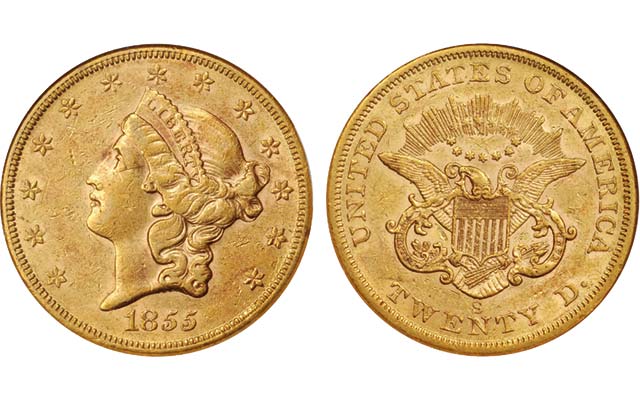 A lightly-worn 1855-S Coronet gold $20 double eagle. A similar example was the writer’s first gold coin purchase back in the early 1950s.

This week I start a series on gold and gold coins. Emphasis will be on American happenings, although of course gold has a worldwide appeal.

Gold more than any other metal has become synonymous with the concepts of quality and value.

Gold coins have been high on the list of collecting interests since our hobby (or industry) became widely popular starting in the 1850s. Even before then we have Robert Gilmor Jr., scion of a Baltimore merchant family, who was collecting American gold coins as early as the 1830s and, among other things, eventually acquired two 1787 Brasher doubloons. The last are the earliest gold coins known to have been minted within what is now the United States of America.

When I close my eyes and think of my career in numismatics I can recall many great events that centered on gold. An early event was the acquisition of my first gold coin, purchased when I was as a young teenager in the early 1950s.

Common $20 double eagles cost about $36 to $39 each then, or not more than the melt-down value. However, that was a lot of money in an era in which, as a beginning dealer, I retailed gem 1909-S Lincoln, V.D.B. cents for less than $20 each and in a memorable instance I was the high bidder at $5 for a gem 1879 Seated Liberty half dollar. A room at the Park Sheraton Hotel in New York City, not far from Stack’s, cost $16 for the night. The context is different today.

That first gold coin I bought was a lightly-worn 1855-S Coronet double eagle. I considered it amazing to be able to hold in my hand a coin made in San Francisco during the Gold Rush! As you know if you’ve been a reader of my column, for me a coin is one thing, but equally important are any aspects of art, history and romance that go along with it.

I never dreamed then that years later I would be involved in the sale of the Louis E. Eliasberg Collection, which held every gold coin from the 1849 Coronet dollar to the 1932 Saint-Gaudens double eagle. It would have had a 1933 $20, had not its owner turned it over to the government. Oh well. I do have a shirt-tail connection to that issue in that in 2002 Stack’s, which with which I am now connected, auctioned a 1933 double eagle. I never dreamed that I would be part of the sale of the golden treasure from the SS Central America and write the definitive book about it.

So begins my series on gold. See you next week.