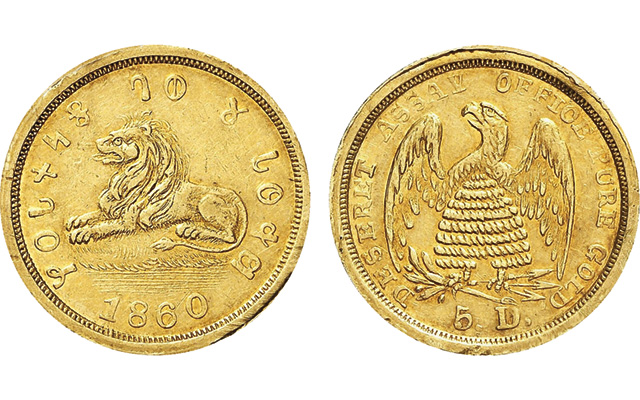 The 1860 Mormon $5 gold coin in the Künker sale is offered by the auction firm as Very Fine to Extremely Fine. 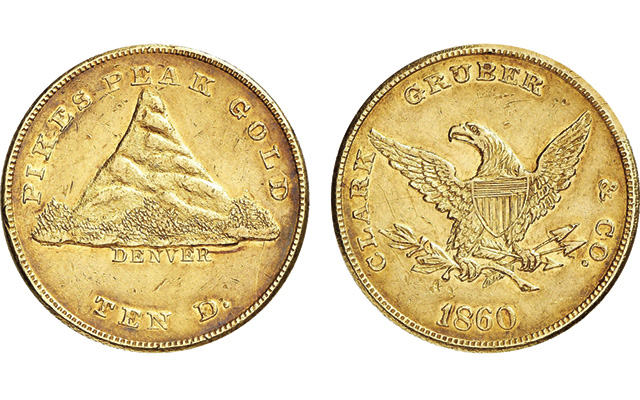 Among the other coins in the sale are an 1860 Clark Gruber & Co. $10 pioneer gold coin in Almost Extremely Fine.

The auction is being held Jan. 29 at the Estrel Hotel.

Pioneer gold coins were issued by private mints in gold rush regions where no federal Mint facility existed to supply local commerce with needed coins made from locally mined gold.

Soon after their arrival in what was to become the Utah Territory, the Mormon leadership established a region they called Deseret, petitioning Congress in 1849 for statehood recognition.

Congress responded by establishing the Utah Territory in 1850, naming Fillmore as its capital city rather than Salt Lake City. Salt Lake City replaced Fillmore as the territorial capital in 1858, and Utah joined the Union as the 45th state in 1896.

The obverse of the Mormon gold $5 coin in the auction depicts a lion reclining on a grassy plane beside a river, with HOLINESS TO THE LORD written in the Mormon alphabet and the date 1860 below. The Deseret alphabet was developed under Young’s direction in an effort to improve upon the inconsistent spelling within the English language.

The reverse design of the 1860 Mormon $5 coin features an eagle with a beehive in its breast region. Inscribed around is DESERET ASSAY OFFICE PURE GOLD.

The Mormon word "deseret" is interpreted as “honeybee.” The beehive symbol is said to have been a favorite emblem of the followers of Joseph Smith and Brigham Young.

Donald H. Kagin writes in Private Gold Coins and Patterns of the United States that 472 of the 1860 Mormon gold $5 coins were struck.

On the obverse of the 1860 $10 coins is a representation of Pikes Peak, with DENVER inscribed below, with PIKE’S PEAK GOLD along the top border and TEN D. along the bottom border. On the reverse is an heraldic eagle inscribed around with CLARK GRUBER & CO.

Legislatively established by Congress on April 21, 1862, the Denver Mint began its fledgling days as a federal Assay Office in late 1863 in the former Clark, Gruber and Company offices at 16th and Market Streets that had been acquired by the government.

The Miner’s Bank in San Francisco is among the first issuers of gold coins in California.

The first evidence of the existence of the firm comes in the form of $1 notes issued in 1849, even though Kagin writes that the Constitution of the State of California in 1849 and again in 1855 prohibited such bank notes.

The leadership of The Miner’s Bank has been determined, according to Kagin, to include Stephen A. Wright and Samuel W. Haight.

Kagin writes there is no evidence to support claims that The Miner’s Bank or Wright & Co. struck its own coins.

Among the remaining U.S. lots in the Künker Berlin sale are: