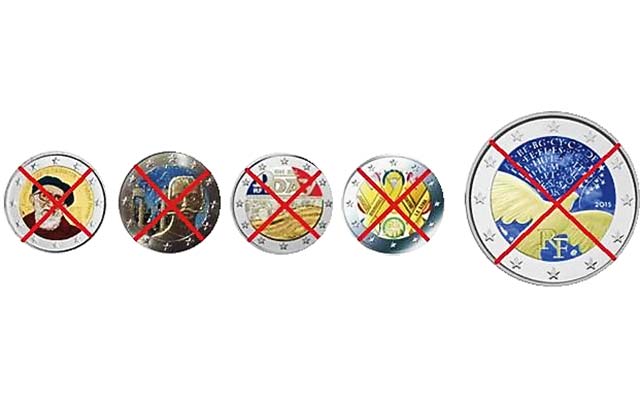 A variety of colorful and gold-plated post-mint modified circulating €2 coins from France offered on the secondary market have drawn the ire of the French Mint.

The French Mint is hitting back against dealers in the secondary market who are modifying its coins.

The Monnaie de Paris on May 27 distributed a letter by chairman and CEO Christophe Beaux threatening legal action against companies that continue to engage in the process after receiving the warning spelled out in the letter, which was sent to all French Mint distributors.

Adding color and gold-plating are popular methods of modifying the coins, specifically the circulating commemorative €2 coins.

“They contravene the intellectual property rights of Monnaie de Paris, and also various statutory and regulatory provisions, of French and Community law, governing the status and the appearance of euro currency coins,” wrote Beaux in his letter. “It is essential that a stop is put to these practices.”

Altering coins makes them unfit for circulation and voids their legal tender status, according to Beaux, because they are in violation of a Dec. 15, 2010, regulation from the European Parliament and Council.

Altered coins risk being confused with legal tender coins, and “they must be considered to be mere novelty coin-like products,” according to Beaux. “However, the risk of confusion with real, unaltered coins which have retained their legal tender status, is obvious.”

The production, the sale, and the importation and distribution, for sale or other commercial purposes, of medals and tokens whose surface includes the words “euro,” “euro cent” or the euro symbol, are of certain sizes within a specific range defined by regulation or whose surface includes a design similar to those present on euro coins is banned, the letter said.

“There is no question that coloured or gilded coins fall within the scope of this wording and the ban that it stipulates since in such a scenario the three conditions are met,” Beaux noted.

Violation of this law could result in one year of prison and up to €15,000 in fines.

According to the French Mint, the altered coins violate the French consumer code, since the coins could create confusion with another good or service, a trademark, a trade name or another distinctive sign of a competitor. The altered coins, now worthless, could be confused for products of the French Mint that have value, officials state.

That violation carries the potential for two years’ imprisonment and up to €37,500 fine for individuals or €187,500 for legal entities.

Additional laws target the counterfeiting and falsifying of money. These laws would apply if “it was argued or suggested that coloured or gilded coins offered for sale are still intended for circulation or likely to be put into circulation,” according to Beaux.

The issuance of altered coins is “parasitic” since anyone doing so rides “on the coat-tails of Monnaie de Paris and takes advantage of its creations to sell a product which the dealer itself has coloured without any authorisation,” according to Beaux.

The production and sale of altered coins constitutes an unfair competition, Beaux stated.

The letter is intended to warn those involved in production, promotion and marketing of coins issued by Monnaie de Paris which have been colored, gilded or altered in any other way that they are ordered to cease within 15 days of receipt of the Beaux letter.

Continued abuse will result in legal action to put an end to the violations and obtain the relevant financial compensation, Beaux wrote.