For collectors who can't afford real thing, copies are substitutes 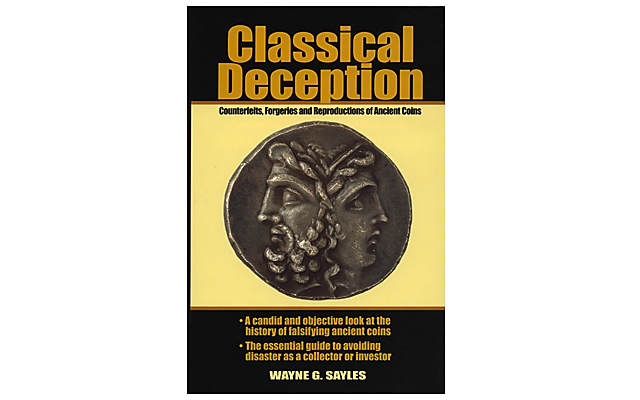 If a collector wants to collect counterfeits and forgeries, education is the key arrow in their quiver. Books like Wayne Sayles' Classical Deception: Counterfeits, Forgeries and Reproductions of Ancient Coins are one way to become educated.

Editor's note: The following is the final segment of a multi-part Coin World series about the market for ancient coin fakes and forgeries prepared by Jeff Starck for the December 2014 monthly edition of Coin World.

While replicas like those being sold today by Charles Doyle are generally inexpensive, the other reproductions are a little pricier.

Many collectors are willing to buy the “classic” fakes, such as Beckers, Paduans, and Robert Ready electrotypes, said Kerry Wetterstrom, former editor of ancient coin journal The Celator, as they have been published and are overall of high quality.

“A lot of sophisticated collectors’ collections included counterfeits identified as such,” he said. “They collected them as a way to educate themselves and because of curiosity, to see what’s out there so they didn’t get fooled.”

There is a genuine price disparity between the actual thing and the purported coins. While it is not unusual for Becker and Robert Ready pieces to sell for several hundred dollars, a few examples of copies sell for more, like reproductions of a Kimon dekadrachm, or a Naxos tetradrachm, Wetterstrom said.

Classical Numismatic Group auctions over the past few years bear this out.

A Good Very Fine Robert Ready electrotype of a silver tetradrachm from Syracuse, in Sicily, styled after a piece by the famous artist Kimon, realized $747.50 in a June 26, 2013, online auction (including the 15 percent buyer’s fee). Authentic tetradrachms of Kimon are famous, and command multiple tens of thousands of dollars when sold at auction.

A struck original Cavino, graded Good Very Fine with a planchet crack, imitating a sestertius of Trajan, sold through the firm’s online auction closing Nov. 5, realized $977.50, including the 15 percent fee. A comparable example was unavailable of an original coin having the same design as the Cavino piece.

Rosa pieces are not that expensive, less than $100 each usually, which means sales are probably limited to the Internet or large lots, according to Wetterstrom.

These pieces are perfectly legal to own, and to sell, as long as they are identified as reproductions and modern (i.e., post-Renaissance) fakes, Wetterstrom said.

“I can’t say that I have ever encountered one mislabeled as an original, but it probably has happened, somewhere, at some point in time,” Wetterstrom said.

The Paduan sestertii are the most likely pieces to be misleading, because of the patina that comes with their age.

Education is the largest arrow in the collector’s quiver when beginning to collect these pieces.

Besides Wayne Sayles’ book, Classical Deception: Counterfeits, Forgeries and Reproductions of Ancient Coins, another useful reference is David Hendin’s Not Kosher, Forgeries of Ancient Jewish and Biblical Coins. Collectors should read works by and speak with experts, and study to make themselves aware of the field.

Collecting forgeries and reproductions of ancient coins has moved into the mainstream.

“They used to be more of a curiosity, every collector owned a few old fakes, but in this day and age of expensive, perhaps even record-breaking prices, these types of forgeries give the collector of average means the opportunity to own something that they can still admire, but would never be able to afford if genuine,” Wetterstrom said.