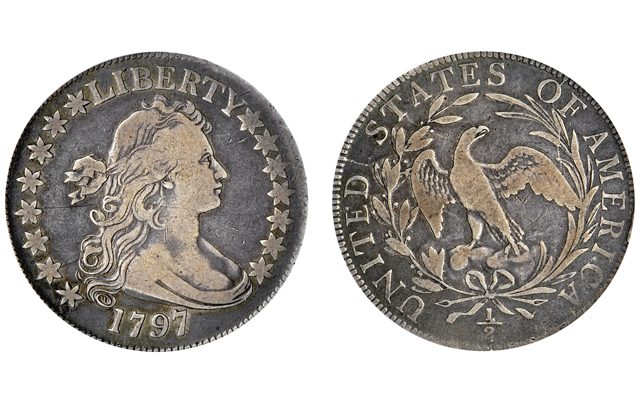 Set to break the $1 million barrier is this 1797 Draped Bust, Small Eagle half dollar graded MS-66 that is considered by some to be the finest example of the type and is perhaps the most valuable half dollar in existence. Images courtesy of Stack’s Bowers Galleries. 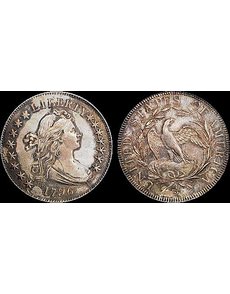 Two varieties of Draped Bust, Small Eagle half dollars were struck in 1796. This one, with 16 obverse stars and grading MS-66, has a high estimate of $1.25 million. 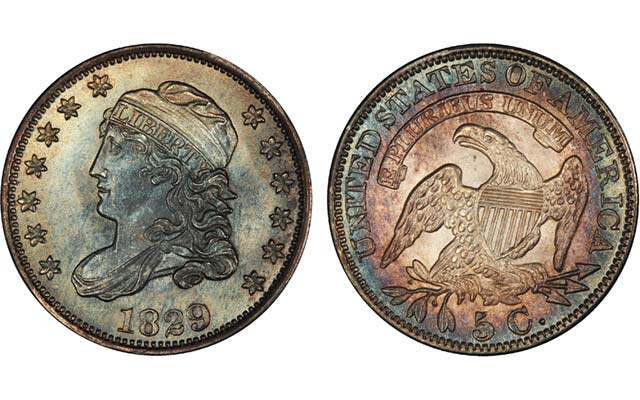 A collector looking for a more reasonably priced Pogue coin may look to Capped Bust half dimes, including this MS-65 example from 1829 estimated at $2,750 to $4,000.
Previous
Next

Collectors and dealers alike are gearing up for Stack’s Bowers Galleries’ and Sotheby’s auction of the collection of Texas entrepreneur D. Brent Pogue, subtitled, “Masterpieces of United States Coinage, Part I,” scheduled for May 19 at Sotheby’s headquarters in New York City.

In his introduction, Q. David Bowers calls Pogue’s collection the most valuable collection of U.S. coins ever sold. The collection was started in the 1970s and continued to be refined in recent years, with many of the coins coming out of auctions over the past decade.

Pogue’s coins are noteworthy for their quality, with Bowers writing: “The Pogue Collection is built on a foundation provided by those who have gone before — great collectors from the mid-19th century to the modern era who formed high-quality cabinets. Nearly all of the Pogue coins have provenances tracing their ancestry to earlier numismatists.”

The May 19 auction is the first in a series of auctions of the Pogue Collection, which includes more than 650 coins. Future auctions are scheduled through May 2017. The next sale is scheduled for Sept. 30 to Oct. 1.

Several of the half dollars are positioned to sell for more than $1 million at the May 19 auction, including a 1797 Draped Bust, Small Eagle half dollar graded Mint State 66 by Professional Coin Grading Service. PCGS graded all of the coins in the Pogue Collection and created special Pogue labels.

Visually, it’s a treat, described with effusive praise, with the description stating: “Both sides are alive with color, the obverse radiant gold and violet framed in pale blue and champagne, the reverse lavender and blue suffused with pale gold. From arm’s length, this appears to be the most beautiful coin imaginable, lightly reflective but still showing full lustrous cartwheel.”

It is offered with a 1796 Flowing Hair, Small Eagle, 16 Stars half dollar that has been its long-term mate, which is similar in appearance and also graded MS-66. This example is the variety with 16 obverse stars (Overton 102 in the series reference).

To have two coins that are so similar is unusual, and to have both be great rarities is even more unusual. Stack’s Bowers adds, “Few pairs of American coins have remained together for so long outside of institutional collections. Since Virgil Brand’s acquisition of these two coins, between 1890 and 1920, they have only been apart for four years, the length of time the companion 1796 was in the John Whitney Walter Collection of coins of 1796. Since 1999, they have been united again in the D. Brent Pogue Collection.” The auction firms predict that the pair will attract worldwide attention.

The lot description shares the history behind the variation in stars on the 1796 half dollars, writing: “The 15 Star obverse type comes from the short-lived plan to place one star on the obverse for each state in the Union. Abandoned after the 1796 statehood of Tennessee, when obverses of silver coins were growing untenably crowded, the 15 Star issue would represent the statehood of Kentucky.”

While few coins from the Pogue Collection are below the four-figure level, several Capped Bust half dimes may sell at relatively modest levels when compared to other coins in the first auction.

One of these is an 1829 Capped Bust half dime graded MS-65 by PCGS. It is a common variety and described as “an elegant gem, with simple and beautiful obverse toning of muted and even blue-green, while the reverse shows concentric rings of pale blue, violet-gray, and brilliant silver.”

Another coin with an accessible estimate is an 1834 Capped Bust half dime graded MS-66 that was sold at Heritage’s April 29, 2009, auction of the Joseph C. Thomas Collection for $4,025. At the Pogue sale it is estimated at $3,000 to $5,000 and described as “brilliant and lovely with abundant frosty luster and an above average strike.”

However, with the broad interest in the Pogue sale, it is likely that these “entry-level” examples from the first sale of the Pogue Collection may bring much more than comparable examples without the Pogue pedigree.