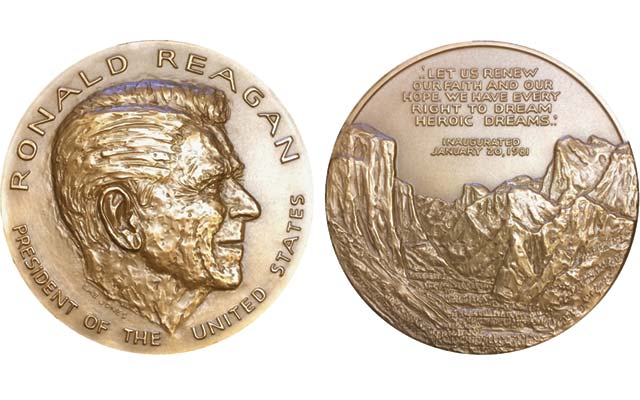 Chief Sculptor-Engraver Elizabeth Jones’ Ronald Reagan Presidential medal features a right-profile portrait on the obverse and Half Dome on the reverse.

Chief Sculptor-Engraver Elizabeth Jones knew her first project would entail designing President Reagan’s medal for the U.S. Mint’s Presidential series. She had hoped for some time with the president, to do sketches from life or possibly photograph him. (Jones was an accomplished photographer as well as sculptor.)

A presidential sitting could not be arranged in the fall of 1981 due to Reagan’s schedule, so Jones worked from photographs provided by the White House and from other sources to sculpture his right-profile portrait for the obverse.

Jones thought the president should have a say in what would be depicted on the reverse of his presidential medal, so she asked him. He said he would like to have Yosemite National Park (his favorite national park) featured on it. She worked from photographs and focused on the iconic granite monolith Half Dome, which rises some 5,000 feet above the Yosemite Valley in California.

Recently, Jones said she decided to do a “slightly impressionist” right-profile portrait of Reagan because she thought a standard smooth surface would be “boring.”

Jones remembers President Reagan quipping: “Good. You chose my best side!” He was also pleased that Jones had selected a brief quote from his Jan. 20, 1981, inaugural address.

Jones returned to the White House Feb. 3, 1983, when President Reagan first saw the medal. She was present in the Oval Office along with Mint Director Donna Pope when Treasury Secretary Donald T. Regan officially presented to him the gold version of his first-term 3-inch medal.

Bronze versions of the high relief 3-inch and 15/16-inch medals were struck by the U.S. Mint for sale to the public. Neither version is now available from the Mint. However, both are available in the secondary market.