Evidence of ancient triumphal arch found on coin of Nero 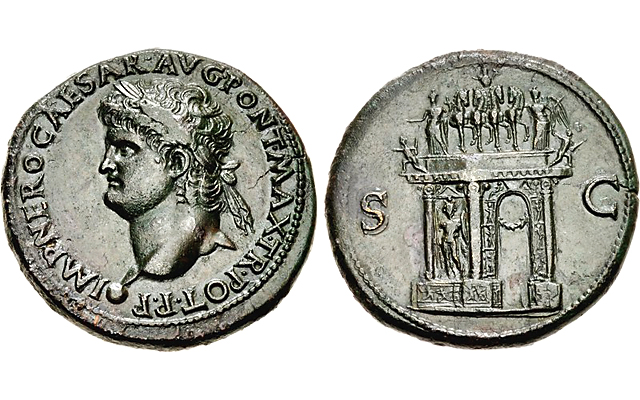 What a triumphal arch erected by Nero to celebrate military victories looked like would be unknown today if it were not depicted on a bronze sestertius.

Though ancient historians left a trove of written records about life centuries ago, the appearance of many pieces of the past are only known from their depiction on coins.

A bronze sestertius of the famed Roman emperor Nero provides a visual record of a triumphal arch whose details would otherwise be unknown in history.

The circa A.D. 66 coin was sold in Classical Numismatic Group’s sale No. 99, where it realized a hammer price of $12,000 (against an estimate of $7,500) plus a buyer’s fee that varies depending on bidding method (the total of prices was unavailable).

The piece was struck at the Lugdunum (Lyon) Mint, and depicts Nero on the obverse with the arch on the reverse. The arch was erected to commemorate Roman military campaigns against the Parthians in Mesopotamia and Armenia.

According to the catalog, the coin type is “vitally important for architectural historians as the arch’s appearance is only known through its depictions on coins.”