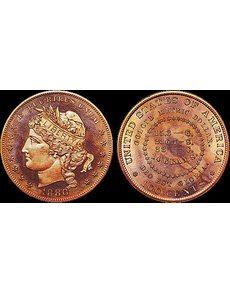 Among the gorgeous rarities from the Eric P. Newman Numismatic Education Society’s collection was this 1880 copper pattern for a goloid metric dollar graded Proof 67 red and brown that realized $36,718.75.

Heritage’s April 25 auction featuring 159 selections from the Eric P. Newman Collection realized $4,087,743. All lots were sold and it was a strong start to Heritage’s Platinum Night auction at the Central States Numismatic Society’s convention in Schaumburg, Ill.

The Newman coins, sold to benefit other nonprofit institutions selected by the Newman Numismatic Education Society for public purposes, were fresh to the market and of nearly uniform high quality.
As expected, the top lot was an 1852 Humbert gold $10 piece (graded Mint State 68 by Numismatic Guaranty Corp. with a Certified Acceptance Corp. sticker) that realized $1,057,500. It was cataloged as “the finest business strike California gold coin of any maker” and traces its ownership back to Augustus Humbert.

The next highest price was $199,750 for a copper pattern 1915 Panama-Pacific International Exposition commemorative half dollar missing the San Francisco Mint mark. Graded Proof 66+ ? red and brown by NGC. A Proof 65 example of the same pattern in silver realized $176,250.

A handful of six-figure rarities aside, many of the coins were accessible to collectors with more normal checkbooks.

Even patterns with great stories could be acquired relatively reasonably. A well-circulated 1859 Indian Head cent pattern graded Proof 12, struck in 100 percent copper rather than that year’s usual 88 percent copper and 12 percent nickel composition, realized $1,410. It once belonged to “Colonel” E.H.R. Green and the catalog noted that it was “a rather remarkable piece that really should not exist, except for an anonymous and sharp-eyed late 19th or early 20th century numismatist who spotted this piece in circulation and saved it for future collecting generations.”