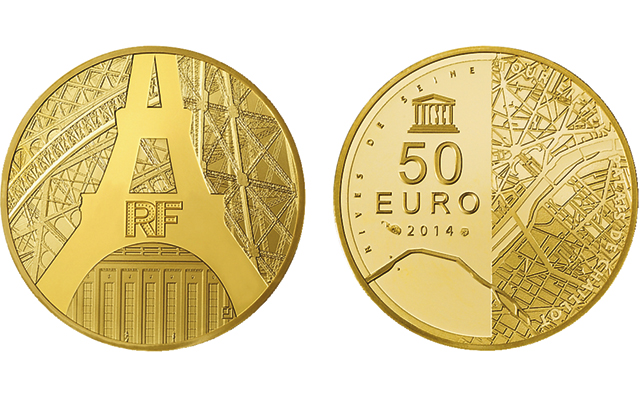 A new gold 50-euro coin from the French Mint is one of five honoring the Eiffel Tower on its 125th anniversary. 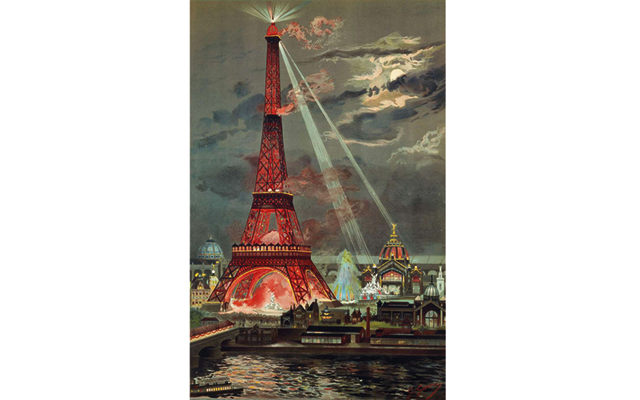 A painting from 1889 shows the Eiffel Tower lit up at night.

Five coins of varying denominations and compositions showing the Eiffel Tower begin a UNESCO coin series honoring scenes along the Seine River. The Eiffel Tower coins are the first of the series for 2014, with additional coins honoring the Palais de Chaillot due later this year.

The initials RF (for Republic Francaise, or “French Republic”) appear as if “riveted” to the tower, in a nod to its construction. Geometric design elements of the tower and, apparently, the 1889 exhibition, fill the scene.

The reverse includes the UNESCO logo, face value, year and the name of the series, Rives de Seine (Banks of the Seine), and text and scenes identifying the monuments that will be honored in 2014.

? A Proof .999 fine gold 500-euro piece weighs 5 ounces, measures 50 millimeters in diameter and has a mintage limit of 99 pieces.

All five coins are available from the Monnaie de Paris’s e-shop.

To order from the French Mint, visit www.monnaiedeparis.fr.