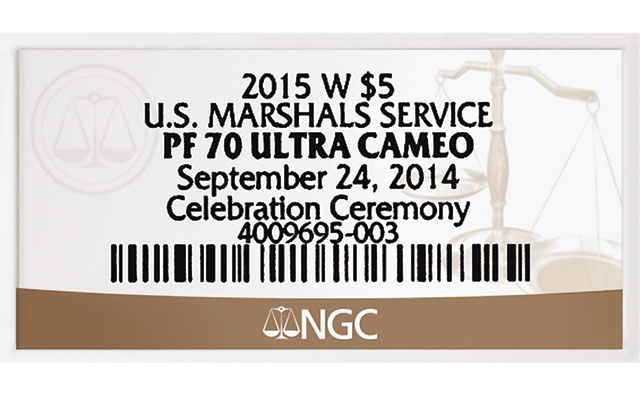 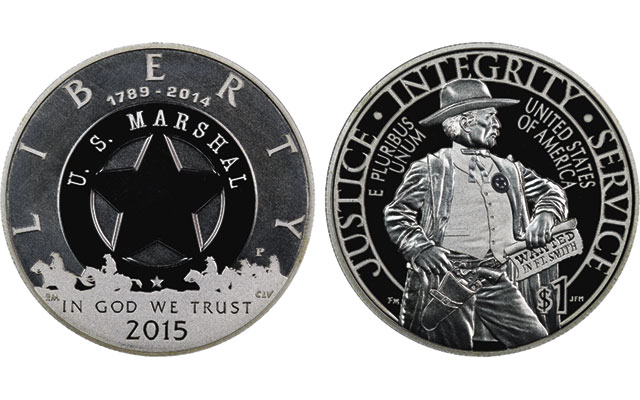 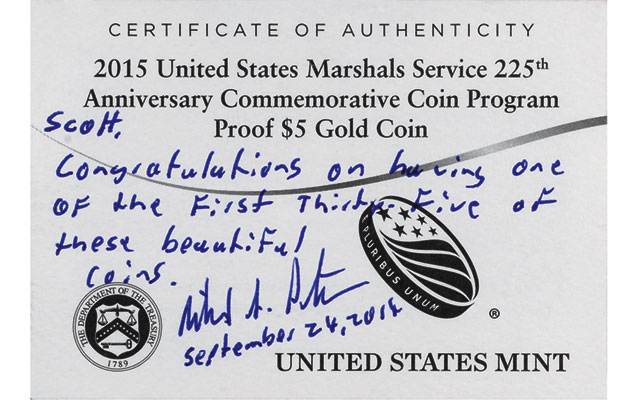 Employees who purchased Proof 2015 United States Marshals Service 225th Anniversary commemorative coins three months before their official release won’t be able to financially benefit from their acquisitions for at least 14 months, if ever.

The purchases by United States Marshals Service employees in September were permitted under Section 5(c) of the enabling legislation, Public Law 112-104, which states, “The [Treasury] secretary may issue coins, to the public, minted under this Act beginning on or after January 1, 2015, except for a limited number to be issued prior to such date to the Director of the United States Marshals Service and employees of the Service for display and presentation during the 225th Anniversary celebration.”

However, restrictions have been imposed on any resale of the commemorative coins.

Drew J. Wade, chief of public affairs for the United States Marshals Service, said Oct. 17, “Early purchasers may not personally financially profit by receipt of payments for loan or use of the coins during the 225th period.

“The early purchase of the coins is an unusual privilege and was allowed by Congress for the good of the USMS and the public interest in celebrating the 225th anniversary and history of the USMS, not for personal gain.”

Wade said the celebration period runs from Sept. 24, 2014 — the 225th anniversary date — through Dec. 31, 2015, the last day the commemorative gold $5 half eagles, silver dollars, and copper-nickel clad half dollars can legally be struck by the U.S. Mint.

Wade told Coin World he did not know if the prohibition against financial benefit extended beyond Dec. 31, 2015.

Adam Stump, deputy director of public affairs for the United States Mint, said Oct. 16 that the “limited number” of pre-sale coins referenced in the enabling legislations totals 35 Proof examples of each of the three commemorative coin denominations.

“Sixteen of each coin type have been sold thus far” to U.S. Marshals Service employees, Stump said. “The USMS personnel said they are planning to purchase the remaining 19 of each coin type.’

The coins were not sold in special three-coin-set packaging, though Mint officials anticipate offering such a set when sales begin in 2015.

Nine examples of each of the three denominations were delivered personally Sept. 18 by Deputy Mint Director Richard A. Peterson to USMS Director Stacia Hylton at USMS headquarters. Wade confirmed Hylton purchased one of each denomination, buying three Proof coins.

The grading labels pedigree Sanders’ and Blythe’s coins to the Sept. 24 museum ground-breaking ceremony. Precedent in the numismatic marketplace has shown that coins pedigreed to a special event with a grading label confirming the provenance have often appreciated significantly in value on the secondary market over those without Proof of provenance.

As far as the certificates of authenticity for any of the remaining coins, “you will have to check with purchasers as to which COAs were signed,” Stump told Coin World. “We do not have possession of the COAs. They are with the coins, which are with the purchasers.”

Stump said the Mint is prohibited by law from collecting surcharges on coins in years in other than those in which the coins are intended to be issued.