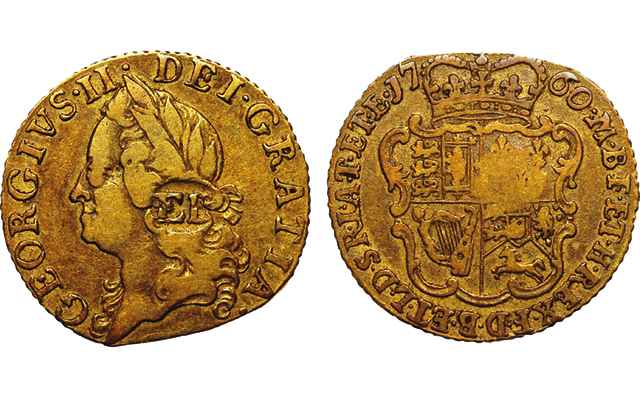 The EB counterstamp of New York goldsmith Ephraim Brasher as seen on the obverse of this 1760 British gold half guinea coin was an assurance that foreign coins bearing his stamp that circulated in 18th century America were of the proper assay or quality. 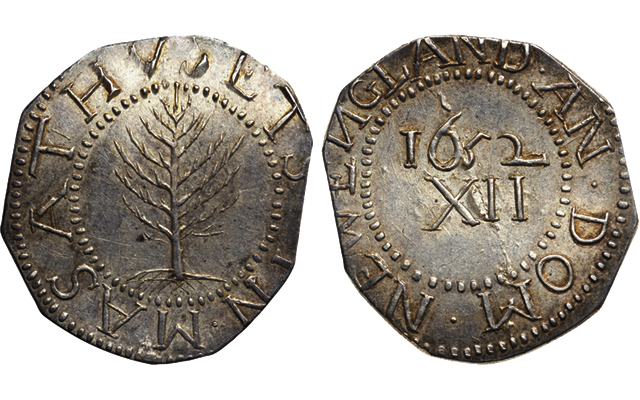 Graded Mint State 64 by Numismatic Guaranty Corp., this Noe 7 variety of 1652 Pine Tree, Large Planchet shilling appears as lustrous as the day it was struck. 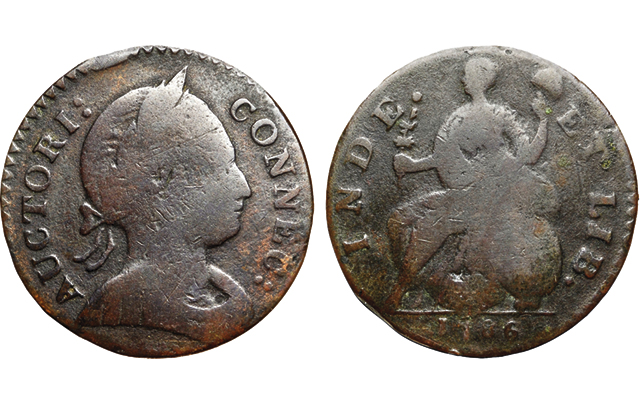 It doesn’t necessarily require a fortune to buy a piece of numismatic history from Eric P. Newman’s nine decades of collecting.

While purchasing a counterstamped 1787 Brasher gold doubloon, should one become available, will likely take millions of dollars, a collector can acquire for far less money a coin in the Newman Collection that bears the familiar EB hallmark of noted New York goldsmith Ephraim Brasher.

Heritage Auctions will offer the fourth auction of the Eric P. Newman Collection in sessions scheduled for May 16 and 17 in New York City.

One of the 687 lots presented is a 1760 British gold half guinea bearing Brasher’s EB hallmark or counterstamp. The EB, within an oval cartouche, is punched into the portrait of King George II on the obverse.

As Brasher was arguably the most well-known and respected of the New York goldsmiths and silversmiths, the appearance of his counterstamp on foreign coins circulating in 18th century America assured the assay or quality of those coins, according to the Heritage auction cataloger.

The lower edge of the EB counterstamped half guinea offered is clipped, presumably contemporaneously, according to the cataloger, to reduce its weight to slightly below the New York standard of 5 pennyweight, 6 grains for one guinea, or 63 grains for a half guinea.

Brasher wasn’t the only New York goldsmith and silversmith counterstamping coins to attest to their meeting the standard of the day.

The Newman IV auction offers an NGC Extremely Fine 40 1772 British gold guinea bearing Burger’s counterstamp in an oval cartouche punched into the eye of the portrait of King George III.

At 125 grains, the coin is one grain below the accepted standard for a gold guinea.

One wonders how a Massachusetts silver coin can survive in approximately the same condition it appeared when struck more than 360 years ago.

Among the examples offered in the Newman IV auction are a 1652 Pine Tree, Large Planchet shilling, cataloged as Noe 7 in The Silver Coins of Massachusetts by Sydney P. Noe), graded NGC Mint State 64, and a 1652 Oak Tree, IN at Bottom, shilling, Noe 4, graded NGC MS-65.

According to Christopher J. Salmon, author of the 2010 reference The Silver Coins of Massachusetts: Classification, Minting Technique, Atlas, the variety is sometimes referred to as the “Tall Tree” variety. Salmon attributes the Noe 7 Pine Tree shilling as Salmon 6-Dii in his cataloging system.

According to Salmon, “The tree is beautifully and realistically rendered with a narrow tapering trunk arising from a ground line that appears to consist entirely of roots which abundantly fill the foreground.”

Newman’s 1652 Oak Tree, Noe 4 shilling is identified as one of the finest known examples.

The Newman IV auction’s offering of Connecticut coppers includes one 1786 piece with an unusual name and a 1788 error bearing two obverse portraits.

The first coin is a 1786 Connecticut, Mailed Bust Right, Scholar’s Head copper in NGC Very Good 8. It is attributed as the Miller 3-D.1 variety in State Coinage of Connecticut by Henry Miller.

Obverse 3 is known as the “Scholar’s Head,” a moniker coined by numismatic researcher and cataloger Michael Hodder.

The obverse exhibits two side-by-side profiles. On the reverse, the right portion of the reverse design appears to the left. On the right is an elliptical indentation, a brockage image.

The double-struck, brockage error was acquired more than 70 years ago from the estate of prominent collector Col. E.H.R. Green.