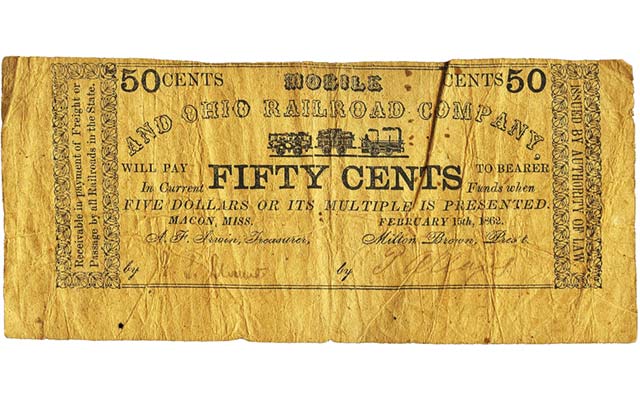 A note issued by a railroad in Alabama was good for both freight and passenger travel. The modern-day successor to the issuer is now part of the Canadian national railway system.

Many of us have a fascination with railroads.

Some enjoy a steam train ride through the mountains while others opt for a dinner ride or the panorama of a museum’s collection of rolling stock.

Many obsolete paper money collectors enjoy collecting notes with vignettes of trains or locomotives, while still others collect notes issued by many of America’s antebellum lines.

Originally chartered in 1848 by the states of Alabama, Mississippi, Tennessee, and Kentucky, the railroad was envisioned as connecting the gulf port of Mobile, Ala., with the Ohio River near Cairo, Ill. After the Panic of 1837, the prospect of connecting Mobile with the Midwest via the Ohio River was quite attractive, since the agricultural bounty of the Midwest could be moved rapidly by rail.

In a sense, this project challenged the traditional trade route of the Ohio and Mississippi rivers to the port of New Orleans. Unlike many such projects, this venture was successful. Construction was completed to Citronelle, Ala., a distance of some 35 miles from Mobile, in 1852 and to Columbus, Ky., an additional 439 miles, by April 22, 1861.

Timing is everything, and the completion of the line to Columbus followed the beginning of the Civil War by 10 days. The railroad’s strategic location soon made it the subject of unwanted attention from both sides during the war, and it had to essentially be reconstructed after the damage incurred during that struggle.

Through the usual string of mergers, consolidations and purchases, the Mobile & Ohio Railroad became part of the Illinois Central Railroad and ultimately, today, part of the Canadian National system. Who would have thought that what investors and citizens of Mobile, Ala., began in 1848 would become part of an international railway encompassing more than 20,000 miles of track, headquartered in Montreal?

The note itself was issued in Macon, Miss. It depicts an old passenger train and was payable in current funds. Interestingly, the note indicates that it was receivable for both freight and passage on all railroads within the state of Mississippi. It is another example of a small simple note with a great story.

What stories do your notes have to tell?