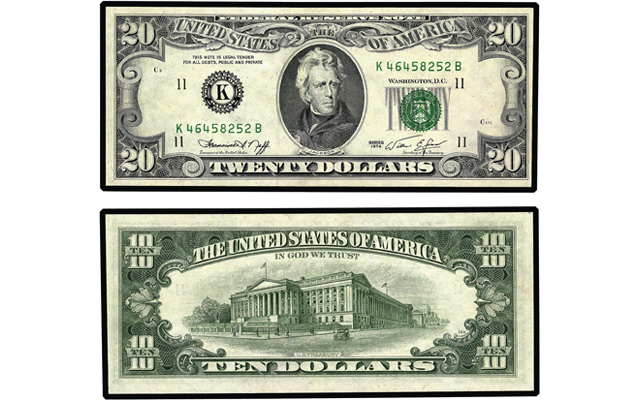 This Series 1974 Federal Reserve note has a $20 face design and a $10 back design. The double-denomination note is among the most desired of all paper money errors.

The following is the first in a series of posts on double-denomination U.S. notes.

Andrew Jackson, his tousled hair topping that patrician head, a hand clutching his cloak at his upper chest, peers out from the centered portrait at something in the distance and to his left. All of the design elements are there and in their usual places on the Series 1974 Federal Reserve note, including the denominational inscription TWENTY DOLLARS along the border at the bottom.

The back of the note, too, looks perfectly normal. The stately columned Treasury Building rests at center, with a 1920s-styled automobile traveling down one of the streets framing the building. Stretching along the bottom border of the note is the denomination TEN DOLLARS.

Wait a minute. What?

Flip the note over again to the face; confirm that it has the designs of the $20 denomination. Then back over to the back, where you rediscover the $10 note’s Treasury Building and not the scene of the White House that should be on a $20 note.

Yes, the note is genuine — it’s what paper money collectors call a double-denomination error, printed with the face plate of one denomination and the back plate of another.

Looked at casually, the two sides of the note taken in individually, the note barely registers a 2 on the excitement scale of 1 to 10. It does not have the immediate wow factor of a note with upside down or off-center seals and serial numbers, or the neatness of an offset printing error with its extra layer of ink in a mirror image of the design from the other side of the note. It’s not until the brain makes the connection, realizing the absurdity of a $20/$10 note, that the observer recognizes the sheer awesomeness of the error — it scores a perfect 10.

How did it happen?

The Series 1974 double-denomination note is the latest such error (at least of the traditional kind) produced by the Bureau of Engraving and Printing or one of its designated private printers. All of these notes — from the 1860s $10/$20 national bank note of the Second National Bank of Springfield (Massachusetts) printed by the private American Bank Note Co. on behalf of the Treasury Department, to the Series 1974 $20/$10 issue printed by the BEP — have their origins in the printing methods used.

The Series 1974 error was printed on sheets of currency paper (a mix of cotton and linen) sized to hold 32 individual notes. The sheets were first run through a press containing curved plates for the $10 denomination mounted to a large plate cylinder. After the back of each sheet was printed, it was set aside in a pile with other one-sided sheets to allow the ink to cure.

The sheets were then run through a press containing plates containing the face design, and here is where the error occurred. The sheets containing the back design of the $10 note were transported by mistake to a press set up to print the faces of $20 notes. Somehow the mistake was not noticed during the third printing run through the overprinting press where the sheets received their serial numbers and seals, or when the stacks of sheets were cut into individual notes that were then bundled for transportation to a Federal Reserve Bank — in the case of the errors, to the Dallas bank.

Once the Series 1974 “$30” notes entered circulation, keen-eyed users began discovering the oddity. The note illustrating this article was found in the Houston area; by the time it had been set aside, it had received enough wear to be graded Extremely Fine/About Uncirculated. As described in the September 2007 auction in which it was sold for $23,000, the note had a “few folds.”