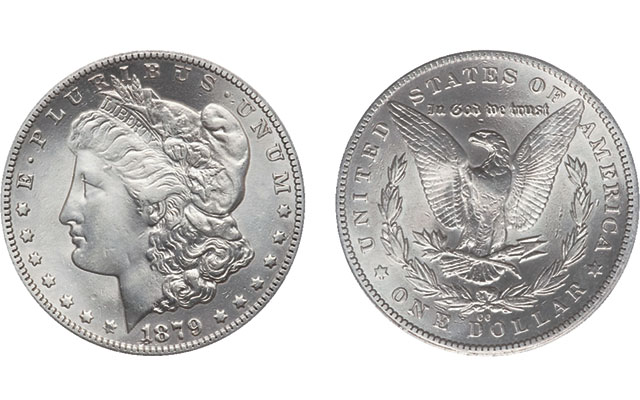 Third-party grading has weeded out many deceptive whizzed coins from the marketplace, such as this lightly circulated 1879-CC Morgan dollar with surfaces that have been processed to artificially simulate luster.

The best advice is often timeless.

A colleague placed a copy of a 1986 compilation by the Chicago Coin Club titled Perspectives in Numismatics on my desk because it had an article on the intersection of art and numismatics by Cory Gillilland.

Immediately following that essay was a piece by longtime hobby publicist Donn Pearlman titled “B.U. or Beware!” He started the piece asking, “Do you know any investor who would rush to an unfamiliar stockbroker, hand over $10,000 and say, ‘Buy me some stocks?’ ”

What followed were some cautionary tales from investors who “would have seen a better rate of return on their investments if they tossed $100 bills from skyscraper windows.”

The essay was penned before the wide adoption of third-party grading and “slabbing,” which have taken some of the subjectivity out of grading and authenticating (while adding new layers of complexity).

The first he calls “The Pearlman Principle,” writing, “Numismatic investment is like a sewer — you get out of it what you put into it.”

The second looks to a warning that Better Business Bureaus across the country have shared with consumers: “If the deal seems too good to be true, it probably is.”

Finally, he looks to hobby publisher Lee Hewitt’s famed statement, “There is no Santa Claus in numismatics.”

It’s telling that, amid all the change in our hobby, some things remain the same.

Pearlman advises collectors to make sure dealers are members of the American Numismatic Association and the Professional Numismatists Guild. Both remain important protectors of the hobby.

In the essay he recommends collectors read Scott Travers’ book The Coin Collector’s Survival Manual. First published in 1984, the book is still relevant and Travers is hard at work on a new edition.

Finally, if there’s an over-arching theme in the essay, it’s that an investment in learning coin grading will pay dividends many times over in a collector’s lifetime.

Understanding what you are buying and choosing trustworthy sources to buy from are both essential for coin investing.