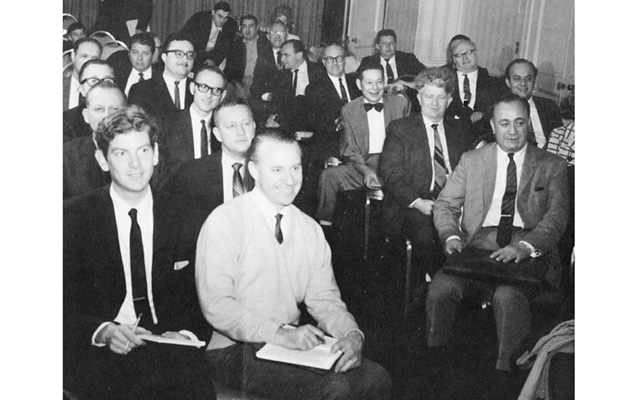 Don Partrick is seated in the center of the picture, wearing the light-colored sweater, next to Jon Hanson as the two attend the December 1968, New Netherlands 60th auction.

Heritage Auctions’ offering of 357 lots from the Donald G. Partrick Collection of extraordinary colonial U.S. coins and 1792 pattern coins on Jan. 8 at the Florida United Numismatists show in Orlando is important.

To put the 1792 pattern coins into perspective, the Partrick Collection has 12, and that number exceeds the number in great collections including the Garrett Collection, the Norweb sales, and surpasses the seven examples in the National Numismatic Collection at the Smithsonian Institution. A dozen 1776 Continental dollars including two of the four-known silver examples are included, and many of the pieces have been off the market for more than a generation.

Heritage plans to offer more selections from the Partrick Collection in conjunction with the 2015 and 2016 American Numismatic Association World’s Fair of Money auctions as well as the 2016 FUN show in Tampa.

In the catalog’s opening essay, dealer Jon Hanson recalls that he met Partrick while manning the New Netherlands Coin Company bourse table at the fall 1966 Great Eastern Numismatic Association coin show. He writes, “Don was interested in early American and colonial coinage and sought someone knowledgeable in these fields that would take the time to answer questions, find nice coins … teach old school conservative grading, and generally assist in building a decent collection of coins.” Over time their relationship grew. Hanson said, “what a journey — buying, owning and handling great colonial coins for a collector who would listen and wanted to learn.”

Partrick benefited by the great collections coming to market as he was actively collecting, including Taylor, Roper, Garrett, Norweb and eventually John J. Ford’s massive holdings. Partrick took advantage of these offerings to upgrade his collection, resulting in what Hanson and Heritage both consider as arguably the finest collection of American Colonial coins ever to be auctioned. Reflecting on his nearly 50 years working with Partrick, Hanson wrote, “Coins were truly one of his great passions.”

Catalog editors Maureen and Stuart Levine consider it the finest cabinet of Colonial coins ever assembled and said that the coins are a testament to Partrick’s “tireless quest to obtain the best examples of coins possible."