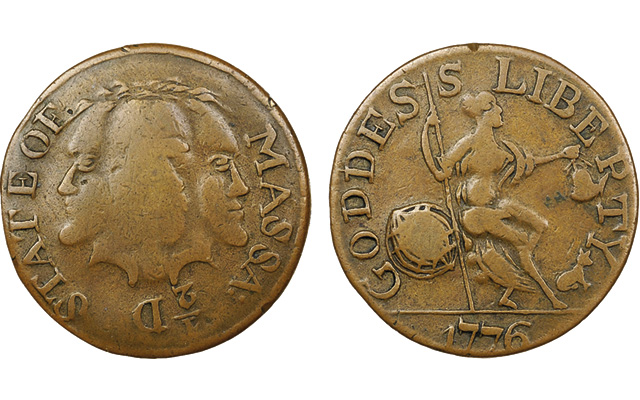 The unique Massachusetts Janus copper carries a date of 1776, although it may have been produced later. It has had just four owners since 1859 when it was first published. 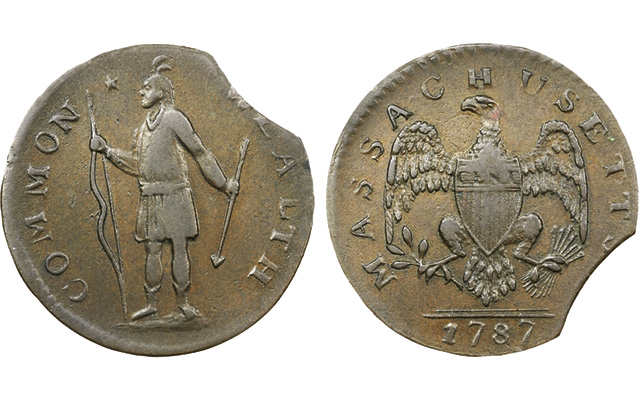 This 1787 Massachusetts cent is believed to be a contemporary counterfeit produced at Machin’s Mills, but is also struck on a clipped planchet.

The section of Heritage's Donald G. Partrick Collection catalog on Massachusetts coppers begins with the famed “ ’1776’ Massachusetts Janus Copper,” which is considered unique. Graded Very Fine 35 CAC, it has been known to collectors since at least 1859 when it appeared in Montroville W. Dickeson’s American Numismatical Manual and Heritage writes that since that time it has had just four owners, “Matthew Adams Stickney, Col. James W. Ellsworth, John Work Garrett, and Donald Groves Partrick, for an average of 39 years each. The implication is that this piece will not appear for sale again until the year 2054.”

The obverse design has three conjoined heads; the reverse has a more traditional seated depiction of Liberty holding a pole and an object that has been described as either the scales of Justice or a Liberty cap. A small animal appears right of Liberty’s leg and while it has been traditionally described as a dog, such as in Sylvester S. Crosby’s seminal 1875 book, The Early Coins of America (where this coin is plated), recent scholarship suggests that it may instead be a cat.

David Hackett Fischer writes in the 2005 book Liberty and Freedom that historically, depictions of Liberty are accompanied by symbols to identify her, such as a cat, “an animal that acknowledged no master.”

The exact origins of the piece are mysterious and while some consider it to be a legitimate 18th century issue, contemporary with the date of the coin, the inscription STATE OF MASSA, suggests that it was produced after July 4, 1776.

Henry Chapman wrote in his 1907 offering of this coin from the Stickney Estate (where it brought $1,050) “1776 Half penny, probably by Paul Revere.” Heritage adds that some consider it a 19th century fantasy since the abbreviation MASSA was not used in the 1770s and “nothing about the design suggests that it was the work of Revere.”

Regardless of the origins, it is a landmark piece and when last offered as part of Bowers and Ruddy’s November 1979 auction of the Garrett Collection it sold for $40,000.

More affordable is a 1787 Massachusetts cent graded Extremely Fine 40 that is an error in that it was struck on a clipped planchet. The variety, nicknamed the “Aged Face,” is believed to be a contemporary counterfeit produced by Machin’s Mills. But, like so many Colonial contemporary counterfeits, it is collected along with the genuine pieces.

Heritage cites an estimate of just 10 examples surviving, with this piece falling as the second finest known, adding that “this mint error is likely unique for this variety.”