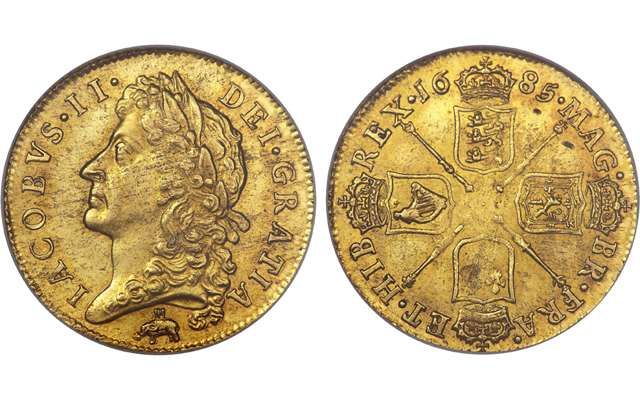 The gold guinea coin was so-named because some of the gold used to strike the coins was from the Guinea Coast of Africa, indicated by the elephant and castle mark below the bust of the king on the obverse. 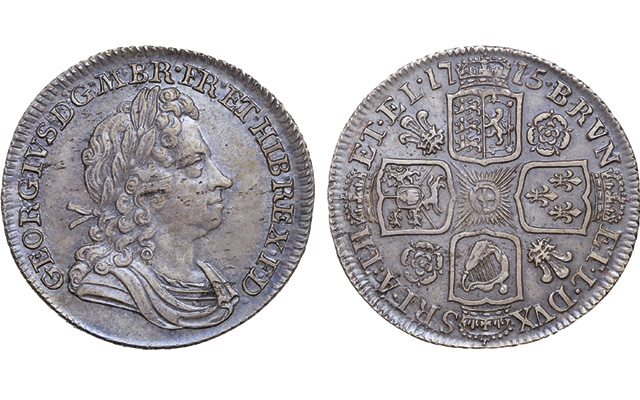 The use of roses and plumes alternating on the reverse of silver coins of England indicates that the metal used for the coins was supplied by the “Company for Smelting Down Lead with Pit Coale and Sea Coale.” 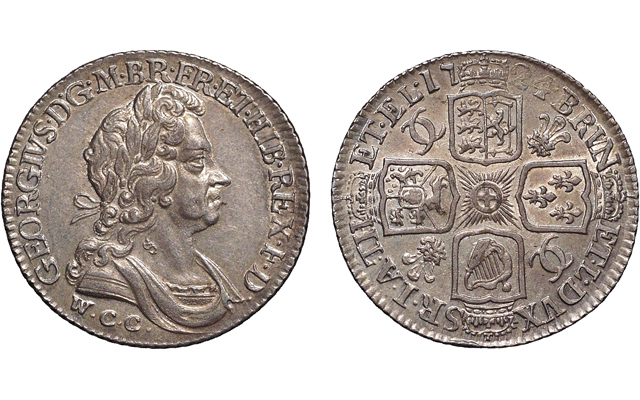 On a few silver coins, W.C.C. on the obverse, with plumes and entwined CC on the reverse, represent the Welsh Copper Company, as on this 1724 George I silver shilling. 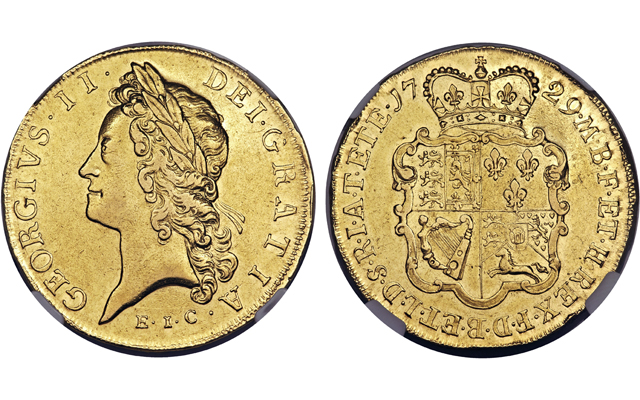 The EIC mark below the bust of the monarch on the 1729 gold 5-guinea coin was placed there to reflect the origin of the gold, from the trades and travels of the East India Company.

Editor's note: The following is the first of a multi-part Coin World series about the secret language of British coins prepared by Jeff Starck for the January 2015 monthly edition of Coin World. See links to the rest of the series at the end of this post.

British coinage has been around for centuries, with a vastness of issues that nearly boggles the mind. From coins issued under ancient Roman influence, Celtic invaders and a succession of monarchies, coinage for the British Isles can seem an overwhelming topic.

But there is a secret language to explore on some British coins, aside from the common things like legends, Mint marks and so forth.

By deciphering the code, collectors can, for instance, trace the origin of metal in certain issues. On another issue, the secret language contains a supposed clandestine commentary on the king.

Who wouldn’t want a coin made from metal recovered from a shipwreck or an early financial scheme, or one that thumbs its nose at authority?

By far the most abundant types of coins in this survey are those coded to reveal the source of their metal.

The practice of identifying the source of metal on coins began with the guinea.

The guinea was the principal British gold coin issued from 1663 until 1813. Originally struck as a 20-shilling coin, the guinea’s value in silver fluctuated with the price of gold, reaching some 30 shillings by the reign of William and Mary at the end of the 17th century. In 1717, Master of the Mint Sir Isaac Newton set the guinea’s worth at 21 shillings — or one pound and one shilling.

The gold coin’s name comes from the Guinea Coast of Africa, where the royally chartered Africa Company mined some of the metal used to strike the coins.

Signifying the African origins of the gold, symbols from the company’s badge, first an elephant and later an elephant and castle, appear on certain coins struck from 1664 to 1726, beginning during the reign of King Charles II (1660 to 1685), in each instance denoting that the metal came from Africa. The symbol was also used on 2- and 5-guinea coins, and rarely on silver coins.

The elephant and castle remained frequent elements on British coins up to the reign of George I, who served from 1714 to 1727.

Also during the reign of Charles II, a small number of silver shillings and half crowns were struck using silver mined in Wales. To identify these coins, a plume of feathers was placed below the king’s bust and on the reverse, though sometimes the plume appears on only the reverse, in the normally open space around the shields.

Most of the silver crowns of 1662 bear a rose below the king’s bust, indicating that the silver was mined in the west of England.

Some of the silver coins of William III, after his wife, Mary, died in 1694, also indicate Welsh and English silver.

During the reign of Anne (1702 to 1714) and George I, a symbol with roses and feather plumes together on some coins indicate the silver came from the “Company for Smelting Down Lead with Pit Coale and Sea Coale” in Wales. The roses of the symbol stood in for silver from the west of England and the feathers, silver from Wales.

The plumes for Welsh silver also appear during Anne’s reign. On certain silver shillings of George I, W.C.C. on the obverse and plumes alternating with an entwined CC on the reverse together indicate the silver was from the Welsh Copper Company.

Much of the gold coinage issued early in the reign of George II (1727 to 1760) features the letters EIC below his bust, identifying the gold source as the East India Company.