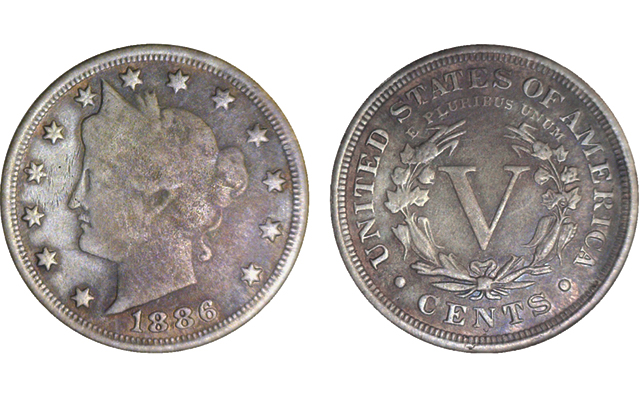 This fake 1886 Liberty Head 5-cent coin has been artificially circulated after being struck with dies fabricated by using a common-date host coin, then cutting in the 1886 date into the die. 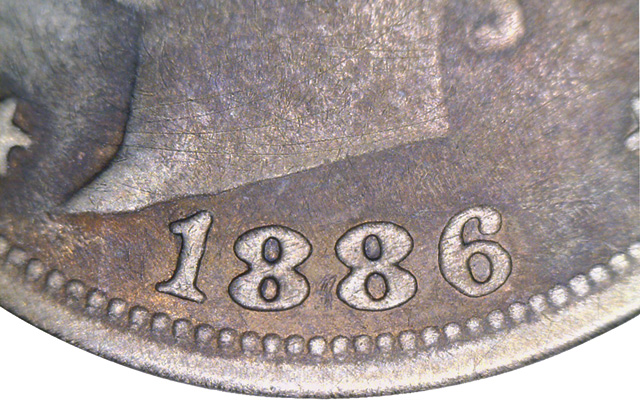 The 1886 Liberty Head 5-cent coin is one of the key dates in the series.

These price levels make the 1886 5-cent coin an obvious target for counterfeiters.

The fake shown here is a reasonably well-made counterfeit, with accurate design details and correct weight, diameter and thickness.

The counterfeiter did not want to go to the expense of acquiring a genuine 1886 Liberty Head 5-cent coin to use as a model coin, though.

Instead, a common-date coin was used to produce the dies, and the 1886 date was subsequently hand-cut into the faked die.

If you have a genuine example for comparison, the differences in the style of the date digits are a quick diagnostic for this fake.

Another diagnostic for this fake is the artificial circulation it has received.

Most struck fakes that are arriving in the United States from China have the appearance of an About Uncirculated to fully Mint State coin.

In contrast, this coin has been artificially worn down to a much lower grade. It was not done evenly, though — the obverse has the details of a Good to Very Good example, while the reverse appears to be Very Fine.

When an expensive U.S. coin has an unusual wear pattern like this, it should always encourage you to take a much closer look.