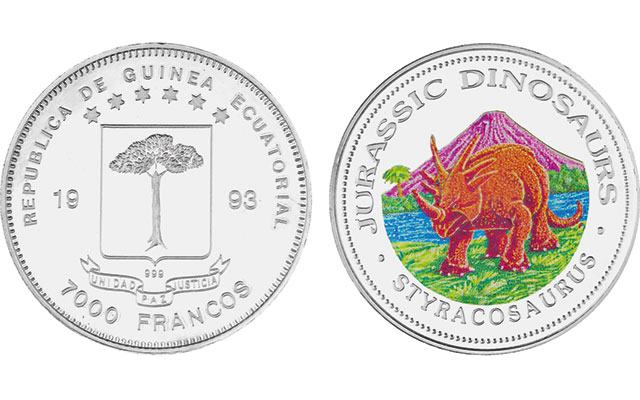 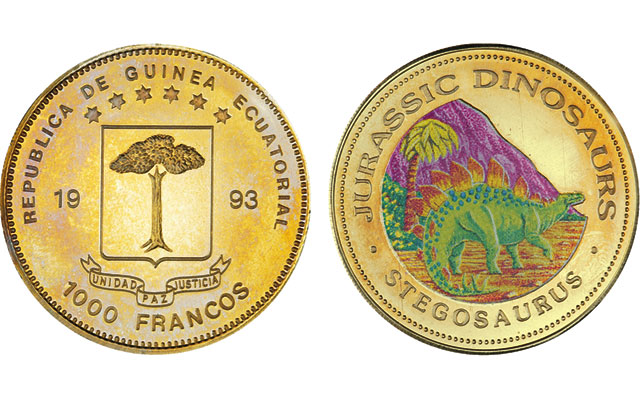 The 1993 Equatorial Guinea copper-nickel version of the colored Stegosaurus ties with Ugandan coinage as the world’s first mint-colorized legal tender. 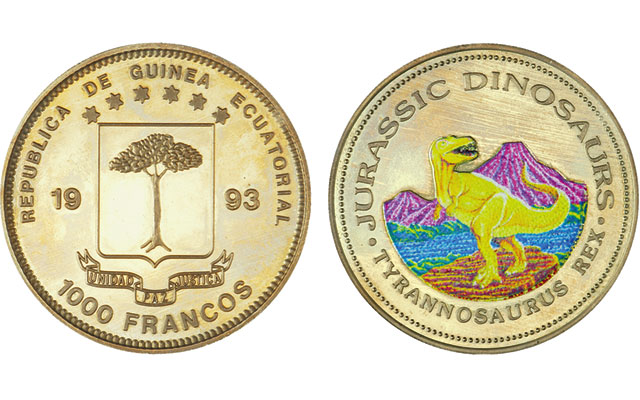 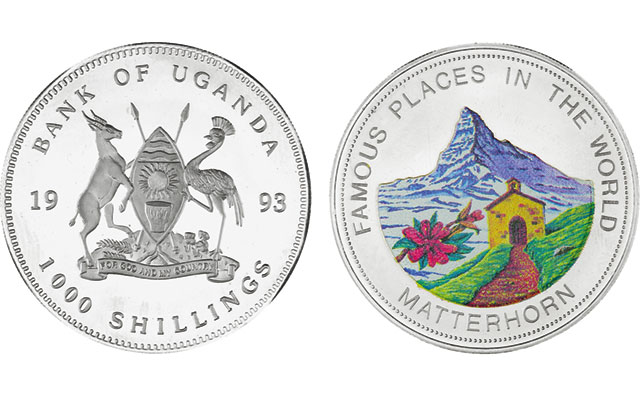 The Mint-colored 1993 coins of Equatorial Guinea and Uganda are the world’s first. This is the Uganda copper-nickel version of the colored Matterhorn coin. 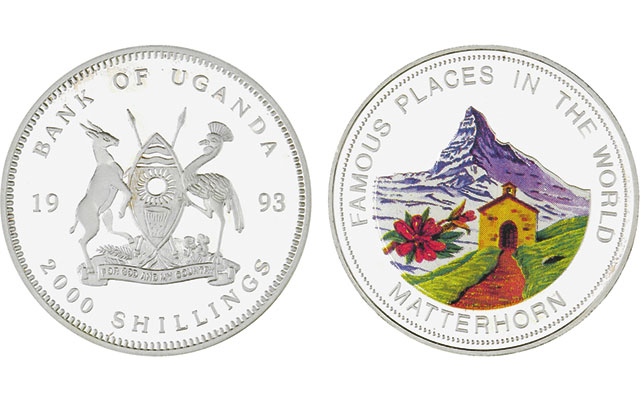 This is the Uganda Proof pure silver version of the colored Matterhorn coin, in the “Famous Places” series. The colored 1993 issues of Equatorial Guinea and Uganda qualify as the world’s first Mint-colored coins.

Editor's note: This is the second part of a multi-part series prepared by Rita Laws for Coin World's February 2015 monthly issue about the world's first mint-colored coin.

An unknown mint in South Africa colored the world’s first legal tender coins, but it did not invent the idea.

The pre-history of colored numismatics goes back hundreds of years. Silver coins have long been hand-enameled by artists using layer after layer of colored silica, fired in a kiln. Often, these altered coins were made into jewelry, especially in Victorian England.

In the United States, silver dimes and half dimes of the 19th century were re-engraved and sometimes enameled to give to loved ones, a collecting specialty known today as “love tokens.”

Israel’s mint made colorizing an official activity by issuing mint-colored medals in the 1980s. Various private mints issued fantasy coins with color in the early 1990s, such as the 20-ecu piece with the name and colored crest of Liechtenstein. And then came those first official issues in 1993.

After the First Coins …

Every year since 1993, more nations have gone to color.

In 1994, a private Swiss mint called Valcambi created its first colored coin for the nation of Papua New Guinea. It features a delicately colored bird of paradise. Also in 1994 came colored coins from Cuba that obviously used a process that was different from that of Coin Invest Trust, the South African Mint, and Valcambi. The Cuban coins included an unlikely subject, the Red Baron’s airplane, and a highly regarded six-animal series titled “Caribbean Fauna.”

European coin dealers selling these issues on eBay in the mid-1990s often described the Cuban coloring process as hand-enameling. They claimed that the designs were created by hand by mint workers using paint-filled hypodermic needles. A different color was applied to each of the raised-edge cells on the coins’ surfaces.

The Cuban Mint didn’t exist before 1977, so it developed this process of hand enameling coins before the mint had seen its 20th year of operation.

And it appears that the Cuban Mint either created similar coins for other nations or shared its process with others because, in 1995, coins with a very similar enameled look were issued by Benin, Congo and Saharawi.

While these other coins lacked the tiny key and star signature of the Cuban Mint right below their dates, the shape, size and placements of the dates on these coins are exactly like those of the 1994 and 1995 Cuban colored pesos. The biggest giveaway, however, is that all four of these nations issued colored vintage airplane commemorative coins in 1994 and 1995 that have an identical “look,” except for the model of plane on each.