Coins from Donald G. Partrick Collection to begin appearing at auction in January 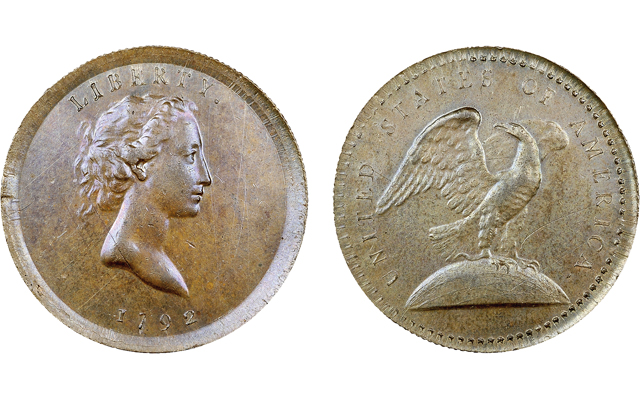 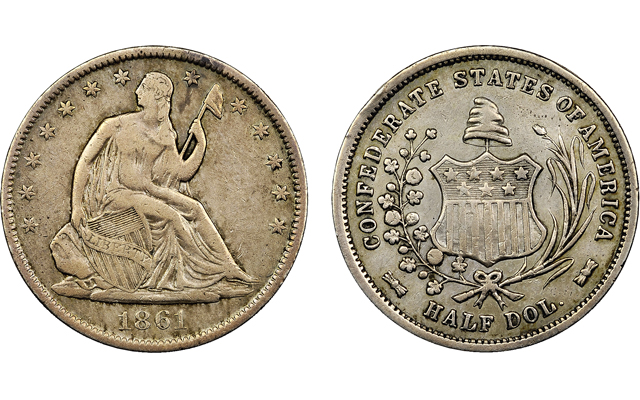 One of four known Original 1862 Confederate dollars, the Partrick Collection piece, illustrated, is believed to have been CSA President Jefferson Davis’ personal specimen. 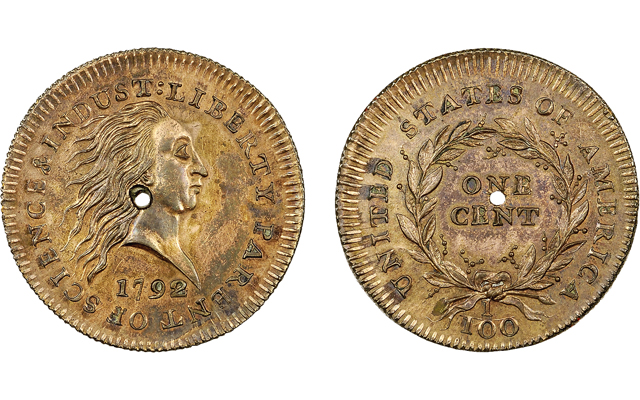 1792 Silver Center cent is the only known example missing the silver plug in the center. The piece was discovered in 1993.

A unique 1792 Silver Center cent without the silver plug, the only copper 1792 pattern quarter dollar in private hands, and what is purported to be Jefferson Davis’ 1861 Confederate half dollar will each be offered at auction in January by Heritage Auctions.

The coins are among 357 lots that comprise Part I of the Donald G. Partrick Collection of Extraordinary United States Colonials to be offered in conjunction with the Florida United Numismatists convention Jan. 7 to 10, 2015, in Orlando.

Partrick’s collection is widely considered the finest collection of Colonial American coins ever assembled, according to Heritage.

Partrick is a long-time numismatist who has extensively served in the governance of the American Numismatic Society, including as its president. Partrick is currently an ANS honorary trustee.

“The name of Donald Groves Partrick is well known to Colonial collectors and his cabinet is second to none in the field,” said Mark Borckardt, senior cataloger for Heritage Auctions. “His collection also includes an unprecedented assemblage of 1792 U.S. Mint patterns and coinage of the Confederacy.”

The piece was discovered in 1993 by Colonial coin dealer Anthony Terranova and sold by Stack’s in its March 15 to 16, 1995, sale. The piece is believed to be a trial strike from before the Silver Center cents were made.

The 1792 patterns were the result of the first attempt by the U.S. government to establish a national coinage that was convenient to use.

Chief Coiner Henry Voigt recommended, instead, inserting a silver plug into a more conveniently sized copper planchet. Together, the two different metals would have the same intrinsic value as the originally envisioned larger copper piece.

Voigt’s proposal was not adopted, though experimental pattern pieces were struck.

For those patterns, a silver plug worth three-fourths of a cent was inserted into a tapered hole in the copper portion’s center. The silver plug flattened out when the entire assemblage was struck on the Mint’s screw press.

The first Silver Center cents were made on Dec. 17, 1792, according to Voigt’s personal journal.

Partrick’s numismatic holdings include a 1792 Eagle-on-Globe quarter dollar pattern by Joseph Wright, one of only two known in copper (the second example is in the National Numismatic Collection), formerly from the J. Hewitt Judd Collection, NGC MS-63 brown.

Andrew W. Pollock III in United States Patterns and Related Issues, indicates the quarter dollar patterns were executed at the direction of Mint Director David Rittenhouse. Wright may have used his wife, Sarah Vandervoordt, as the model for Miss Liberty.

Other 1792 patterns in Partrick’s collection include:

Partrick’s Confederate half dollar, graded NGC Proof 30, is identified by Heritage as being from the Jefferson Davis Estate.

Images provided to Coin World by Heritage match those for the example sold Oct. 14, 2003, at auction by Stack’s in Part I of the John J. Ford Jr. Collection. In the Ford sale, the Confederate half dollar offered was described as “Believed to be President Jefferson Davis’ Personal Specimen.”

The obverse depicts a unique design featuring a Liberty cap on pole behind a shield. The reverse reflects a Federal obverse intended for an 1861 Seated Liberty half dollar.

The four original CSA half dollars are believed to have been struck at the New Orleans Mint under Confederate control before New Orleans fell to Northern forces.

According to historical records, the half dollar was personally presented to Davis by CSA Treasury Secretary Christopher G. Memminger.

Also included in Part I of the Partrick Collection are 12 Continental dollars, including two of the four known silver examples. A third will be offered in a later auction. Among the dozen pieces are examples of all seven die varieties, in all known metals, the only complete set ever formed. Among them are:

Massachusetts silver is represented in the first sale by six New England shillings, five Willow Tree pieces, 40 Oak Tree coins and more than 50 Pine Tree coins. Seven Higley coppers in the collection include six different varieties, among which is the famous and unique (1739) WHEELE GOES ROUND copper, NGC Very Fine 30, formerly from the Garrett Collection.

Maryland coinage will be represented by the offering of 10 Lord Baltimore coins, six Chalmers pieces and a Standish Barry threepence.

According to Heritage, one of the most fascinating sections of the first sale is the nearly 30-strong grouping of New York coppers, including five Confederatio coppers and 11 Immune or Immunis Columbia coppers.

Future auctions will offer: additional New York pieces, including two Brasher doubloons, one of the New York variety (the finest known, ex Garrett) and one of the Lima variety; Partrick’s Connecticut and New Jersey coppers; and Washingtonia.

The unique 1776 Janus copper in the upcoming Part I sale highlights the Massachusetts copper section, along with an associated Paul Revere token.

Massachusetts coppers of 1787 and 1788 include 37 of the 50 known die varieties, while almost 100 Vermont coppers will be offered in Part I, including examples and duplicates of every known die variety.