Buyer of 1875 Seated Liberty may be looking for upgrade, Cameo tag 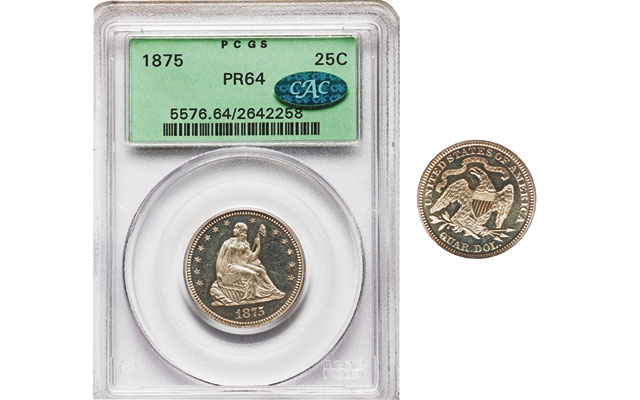 This 1875 Seated Liberty quarter dollar graded Proof 64 by PCGS has a CAC sticker and is in an old green-label PCGS holder. It brought a strong $1,997.50, indicating that the winning bidder may believe it will upgrade.

This 1875 Seated Liberty quarter dollar graded Professional Coin Grading Service Proof 64 with a green Certified Acceptance Corp. sticker represents a valuing challenge. By auction comparables alone, Proof 64 examples of this date bring between $1,100 and $1,300 at auction, and Proof 65 examples normally sell for $2,000 to $2,300.

The lot description notes, “The white-on-black contrast is undeniable, but this brilliant near-Gem lacks a Cameo designation,” and the coin is in an old-style green label PCGS holder.

Based on the price realized, it appears that someone purchased this one hoping that it may upgrade, or get a Cameo designation, or if the winning bidder is very lucky, both!