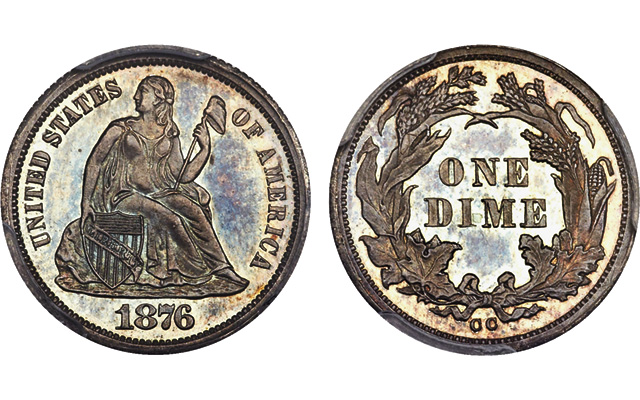 An 1876-CC Seated Liberty dime graded Professional Coin Grading Service Specimen 66+, with a green CAC sticker, is a challenging coin from both collecting and historical perspectives.

Although Proof or presentation strike dimes were not officially produced in 1876 at the Carson City Mint according to Mint records, Heritage writes that the coin in the auction is one of three confirmed to exist. The qualities that differentiate a Specimen strike from a regular issue piece include unusually deeply mirrored fields, a sharp strike that suggests that it was struck twice, and a wire rim.

Both PCGS and Numismatic Guaranty Corp. recognize these as Specimen strikings, and all known examples are from the same die pair. PCGS Coin Facts concludes, “Certainly, this is one of the rarest proof coins of the late 1800’s.”

The piece to be offered at FUN was previously offered at Legend Rare Coin Auctions’ July 17, 2014, Regency Auction VIII where it was offered as part of Bob Simpson’s Proof Seated Liberty dime collection. There it carried an estimate of $250,000 to $275,000 but went unsold.

The firm’s offering of an 1870-S Seated Liberty silver dollar is a special occurrence, as just nine examples are confirmed. Heritage considers it one of the premiere rarities in 19th century numismatics, and like many rarities, the exact circumstances surrounding its production are lost to history, but the commonly accepted number struck is a dozen.

Researchers Nancy Oliver and Richard Kelly have studied this issue extensively and theorize that a San Francisco Mint silver dollar would serve as a memento for groundbreaking ceremonies for the new San Francisco Mint.

Just one known example is Mint State and that one, graded MS-62, brought $1,092,500 at a 2003 Stack’s auction. Another example is rumored to be in the cornerstone of the second San Francisco Mint.

The representative offered at FUN is graded Extremely Fine 40 by NGC and was last offered at auction in Heritage’s April 2008 sale of the Queller Family Collection, where it sold for $805,000. A different example, also graded EF-40, sold for $763,750 at last year’s FUN convention auction.

Heritage distinguishes the present example, writing that “unlike several other circulated 1870-S dollars on the roster, there are no mentionable or distracting marks or other problems on this piece.”