5 coin clubs and how they use print, digital to publish journals 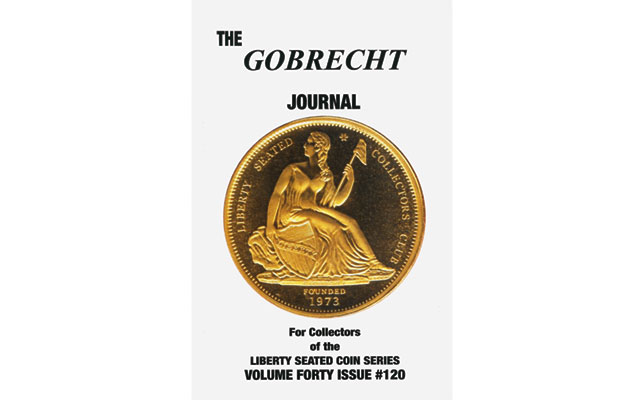 For more than 35 years, the Gobrecht Journal has been the printed voice of Liberty Seated Collectors Club. The journal will continue, in a larger size and full color beginning in November. 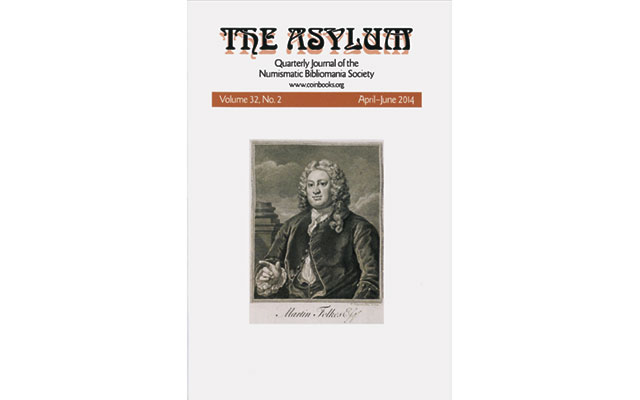 The Asylum is the printed journal of the Numismatic Bibliomania Society, which also electronically offers The E-sylum. 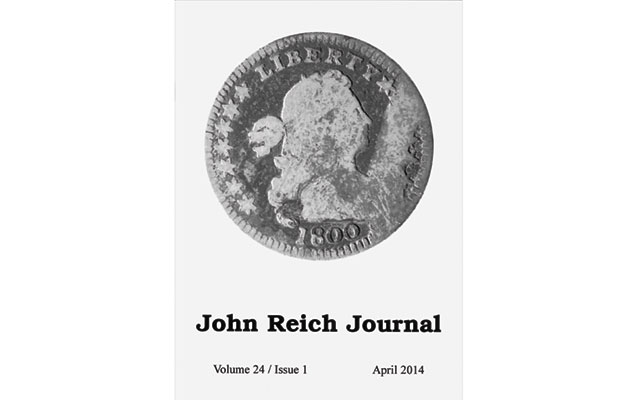 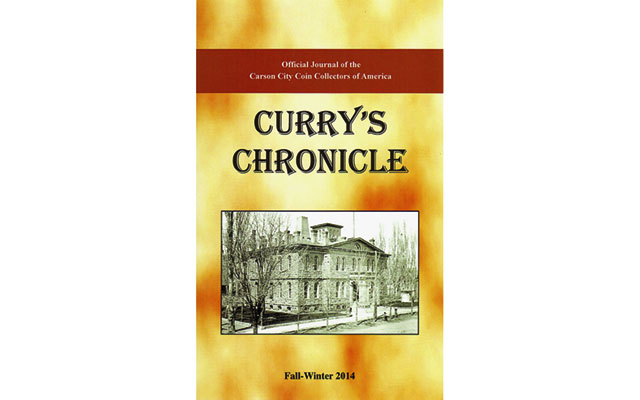 Curry's Chronicle is the print publication of the Carson City Coin Collectors of America. 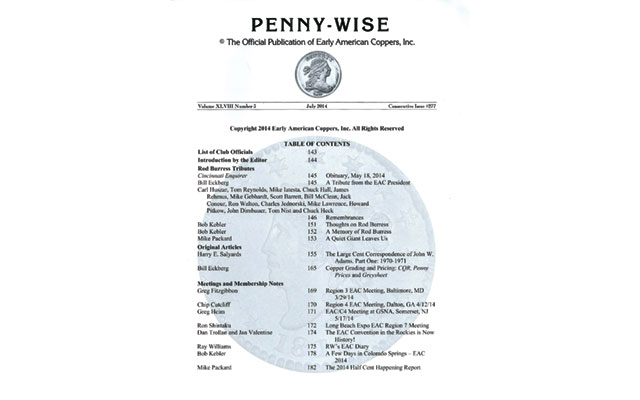 Penny-Wise is the publication of Early American Coppers.

In the wake of the California State Numismatic Association's vote to discontinue printing journal, The California Numismatist, in favor of a digital-only publication, here's a look at how other major numismatic associations use print and digital media to keep their members, and the greater public, informed:

While not as long-lived as the American Numismatic Association, the Liberty Seated Collectors Club has published the print periodical Gobrecht Journal for more than three decades, and now also produces electronically The E-Gobrecht, delivered by email.

LSCC is not resting on the laurels of 30-plus years of service to a membership who collects Seated Liberty coinage; it recently announced improvements to the print journal, to include the use of full color in what has up to now been a black-and-white publication.

LSCC President Gerry Fortin and Bill Bugert, publishing chairman, explain the differences between the club’s two publications. The print journal is for publishing and sharing Seated Liberty research with members. The E-Gobrecht is the monthly newsletter for sharing regional meeting events, current auction news and Seated Liberty coinage discoveries. The print journal can provide more extensive articles on these discoveries.

RELATED: Club journals and publications useful for collectors and hobby

SCC does something with its print publication that is virtually unprecedented in the hobby. Every five to 10 years or so, it takes the articles in the print publication and assembles them into a bound edition called The Gobrecht Journal Collective Volumes. Articles are arranged by denomination, with a section containing articles about Seated Liberty coinage of a more general nature. The group recently released the fifth volume in the hardcover series, covering the print journals of 1995 to 2000.

The digital platform, The E-Gobrecht, also offers fledgling numismatic writers opportunities to hone their writing skills in a less formal publication than the print.

LSCC has 630 members, all of whom receive the print journal. The E-Gobrecht is sent to 650 people, about half of whom, Fortin and Bugert believe, are LSCC members.

The membership still requests the print version “due to its long-standing history of providing ground-breaking Liberty Seated coinage research,” according to Fortin and Bugert.

“The older Gobrecht Journals are collectibles among the membership and a key source of research information where no authoritative book has been published.”

Fortin and Bugert say the increased print costs for expanding the physical size of Gobrecht Journal and going full color has been offset by increased advertising aggressively sought by club officers.

The Numismatic Bibliomania Society delivers its print journal, The Asylum, as part of a paid membership, with The E-sylum weekly by email free to anyone interested. The club’s main audience is the collector of numismatic literature — books, auction catalogs and more.

Wayne Homren, editor of The E-sylum, said the electronic delivery of numismatic information has translated into new NBS members, who receive print copies of The Asylum as a benefit.

“The audience for The E-Sylum is broader, to include ‘just plain collectors’ and anyone else who enjoys collecting and learning new things about coins, tokens, medals and paper money,” Homren said. “The E-Sylum is free to all, and you don’t have to be an NBS member to subscribe. We publish all back issues on our web site.

“Due to the electronic medium, The E-Sylum is a faster, less formal means of communicating with readers. There is more interaction, with readers raising topics or questions and getting responses in the next weekly issue.

“I often describe it as ’a weekly cocktail party with many of the top numismatists from around the world.’ It’s a community where like-minded collectors can hang out and exchange news and information.”

The print journal, which Karoleff says he finds easier to access, is for research articles, while the e-newsletter is for quick news and exchange of ideas between members and others.

“As with any collector club the success is directly attributed to the officers and members who participate,” Karoleff said. “We have a dedicated group of officers that do our best to serve the membership and numismatics.

“The authors that share their research and insights through articles for the JRJ are creating a lasting contribution to numismatic knowledge. Their articles are archived for history in the pages of our journal.”

As president and journal editor, Karoleff said he continually keeps an eye on print and mailing costs to ensure the journal’s successful continuity.

“The printed journal is the ultimate repository of the history of our club and the research concerning the coins of the Reich period for posterity,” Karoleff said.

“A century from now, someone can sit down in their easy chair in front of the fire with an adult beverage and enjoy the works of today’s researchers much the same as we can do from those who published before us.”

Rusty Goe, founder in 2005 of Carson City Coin Collectors of America and editor of its journal, Curry’s Chronicle, said the $30 annual membership dues do not cover the journal’s printing and mailing costs. Three journals are published annually.

The club focuses on coinage struck at the Carson City Mint.

With just 240 members, the group does not qualify for a quantity discount on print costs, and even with bulk-rate mailing discounts, membership dues do not cover all costs.

Goe, owner of Southgate Rare Coins in Reno, said he has been subsidizing the publication costs.

“From the feedback we have received, most members appreciate the printed journals,” Goe said by email. “While the majority of our membership is connected to the Internet, and would probably readily use an online version of our journal, if available, we have many traditionalists (call them old-fashioned) who prefer to hold a printed copy while they read it.

“Members of this latter group take pride in having a full set of Curry’s Chronicles on their bookshelves. Many of them consider the printed copies of Curry’s as collector items.”

Early American Coppers has published its journal, Penny-Wise, for several decades, and also has an electronic component.

EAC focuses on early American copper coinage, including half cents and large cents struck by the Philadelphia Mint, and pre-federal copper coinage.

Harry J. Salyards, editor of EAC’s Penny-Wise since 1986, says the publication for its current 1,100 members “has endured because we have embraced technology, including an online presence, without assuming that this can adequately replace the print medium.”

“Philosophically, I remain committed to a presence in print,” Salyards says. “I would note that paper has been around for 2,000 years, and I feel confident that numismatic research recorded on paper will endure — whatever may happen to such information posted in The Cloud.”

Whether in print or in digital format, the dissemination of numismatic information through multiple channels continues